It’s around this time every year that I start noticing how under-exercised my children are. It’s not enough to spend two hours at the park on the occasional balmy weekend afternoon. It’s not even enough to combine that park excursion with regularly scheduled gymnastics and swimming. The pent-up energy, overfilling my children’s little limbs, begins to spill out all over the house. My son follows me through every room, talking at my back in a decibel destined to do physical harm, describing spaceships he intends to build out of LEGOs (please, go do it!) and “whirrrrr”ing and “powwww”ing to indicate how fast and destructive these ships will be. My daughter, normally content to serve her animals tea or push her dolls around in a stroller, is suddenly more interested in staging gymnastics competitions for said animals and dolls—which mostly involves hurling them across the room. It turns out our house is much too small and we need to move immediately.

And then, oh my blessed stars, it snows. Here in Virginia, this week’s Blizzard of 2015 turned out to be the Blizzard That Wasn’t; and yet, we did get a welcome half an inch of snow. Half an inch of snow is actually all it takes for my children to spend hours outside in the backyard: shoveling, piling up ice, making pictures with their footprints, and directing their incessant chatter towards a new audience of fallen sticks.

Still, I can only imagine how much more exercise many of your children have gotten in the past few days, hiking up snow drifts and pulling sleds through waist high snow. As it turns out, I’m not the only one romanticizing your plight. One has only to page through the billowy white tufts in John Rocco’s Blizzard (Ages 4-8) and Deirdre Gill’s Outside (Ages 3-6) to wish Juno had visited those of us in the South with a little more gusto.

Blizzard is based on author-illustrator John Rocco’s own childhood memories of the Blizzard of 1978, which dumped over 40 inches of snow on his town in Rhode Island (and created snowdrifts as high as fifteen feet!). Through the voice of Rocco as a young boy, we are privy to his excitement as school closes early (“by the time my sister and I got home, the snow was already over our boots”); and, later, as the snow begins to swallow up the words of the STOP sign outside his bedroom window.

Rocco begins his narrative on the Monday of the storm and takes us through each day of the week until Sunday, when the snowplows finally arrive on his street. In the days that fall in the middle, we watch as the novelty of having to climb out the windows (“it was like trying to move through white quicksand”) and digging secret rooms under the snow, turns to the sobering reality of food running out (hot cocoa doesn’t taste nearly as good when it’s made with water, the kids discover). Luckily, ten-year-old Rocco has read his Arctic Survival book cover to cover and, with the help of two wooden tennis rackets, fashions a pair of snowshoes and hikes the mile into town to Bill’s Market.

Much like the way Rocco’s previous award-winning picture book, Blackout, showed us the power of community in banding together around a weather-related event (in that case, a city-wide blackout on a blisteringly hot week in August), so too does Blizzard shine, as Rocco takes requests from various neighbors on his way to procure a few essential perishables for his family. “Are you going to carry all this by yourself?” the clerk asks him, as he bags the groceries. “Yes, sir, I’ve got my sled.” Tired, hungry, and “chilled to the bone,” Rocco makes his way back through the setting sun, dropping off coffee and peanut butter and cat food to his appreciative neighbors—until, at last, he dramatically recounts his “perilous journey” to his parents and sister in front of a crackling fire and a mug of cocoa with milk. The funny thing is, I can actually picture my son doing something just like this. 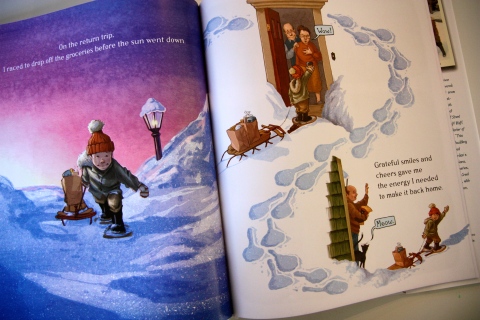 The greatest gift of Rocco’s art is the way in which it so vividly conjures up a sense of time and place. The brown-cream-maroon-olive color scheme has a distinctly ’70s feel, and the boy’s neighborhood is brought to life through elements like a foldout spread, which allows the reader to trace the boy’s foot-printed journey from home to store. Throughout the recount, we feel both the seriousness of the situation and the playfulness of the children (at the same time that the boy stops to knock on neighbors’ doors, he also joins a snowball fight, inspects an igloo, and helps build a snowman). We are rooting for this snow-covered town and rejoicing alongside its inhabitants when the snowplows finally roll in.

Deirdre Gill’s Outside, a simple, lyrical, and ultimately fantastical telling of a boy’s adventures in the freshly fallen snow, couldn’t feel more different than Blizzard. Take away historical context, take away authority figures and dialogue and responsibility, and what’s left is the sheer transcendence of imagination and snow.

As the snow “falls silently on the house,” a little boy tires of trying to convince his older brother to come outside and instead ventures out on his own. He throws himself backwards off the last step and “sinks into the soft snow;” he writes enticing messages to his brother in the frost of the windows; and, finally, he moves off into the woods where he conjures up his own play of life-sized castles, giants, and dragons, all made from snow.

This is Gill’s first book (side note: she is married to children’s author-illustrator, Jason Chin, who has brought us such non-fiction masterpieces as Island: A Story of the Galapagos); and I imagine we will see lots more from her. Her oil paintings overflow with emotion—from hurt and tentativeness, to curiosity and surprise, to bravery and joy. But the real magic comes from her subtle blurring of reality and fantasy, as even the snow-covered evergreens begin to look alive though the boy’s eyes. After all, isn’t this what it feels like to be a child at large in a world transformed by snow and ice? Can we really say where reality ends and our imagination begins?

Outside is everything we could want for our children on a snow day. It even ends with the older brother finally joining the boy in building a snow creation as the sun sets. It is a mother’s silent prayer. Please, please leave the house and don’t come back until you are ready to collapse, silent and spent, in my arms.

Review copy of Outside provided by Houghton Mifflin Harcourt. All opinions are my own. Amazon.com affiliate links support my book-buying habit and contribute to my being able to share more great books with you–although I prefer that we all shop local when we can!

You are currently reading Two New Blizzard-Worthy Picture Books at What to Read to Your Kids.