I have been waiting all year to tell you about this book. Then, last week, terrorists stormed a school in Pakistan and savagely butchered innocent children. My heart broke as I watched the news coverage; and suddenly, I didn’t want to wait a second longer to discuss this special book. Let’s all hold hands and agree to share this book with our children early and often. Please.

Amidst its powerful message of familial relationships and responsibilities, set against the historical backdrop of one of the greatest leaders our world has ever seen, Grandfather Gandhi (Ages 6-12) is also about the very real, very universal feeling of anger. What the book reminds us is that, however inevitable our anger may be, we always, always have a choice in how we express it.

But let me back up. Let me start by saying that Grandfather Gandhi is not a traditional biography of Mahatma Gandhi (in fact, the book assumes the reader has some basic biographical knowledge—a feat easily accomplished by a parent elaborating as he or she shares this book aloud).

Rather, this picture book is a deeply personal account of Gandhi as an old man—as seen through the eyes of his adolescent grandson. A collaborative effort between American author Bethany Hegedus and Mahatma Gandhi’s fifth grandson, Arun Gandhi, Grandfather Gandhi was first conceived a month after 9/11, when Hegedus attended one of Arun’s speeches in New York City. She listened to him speak about the two years he spent as a boy living with his grandfather at Sevagram, the ashram where Gandhi lived towards the end of his life. From age twelve to fourteen, Arun not only got to know his grandfather, about whom he had only ever heard stories, but he learned one of the greatest lessons of his life.

Grandfather Gandhi does a masterful job of gently inviting the reader into this difficult time of transition for Arun. For the young boy, coming from his home in South Africa (where his favorite pastime was watching John Wayne movies on TV), life on the dusty ashram could not have felt more foreign. The mushy pumpkin porridge, the 4am call to prayer, the communal labor (from weeding the garden to changing toilet buckets), and the strict daily tutoring in the language of Gujarati all threaten to overwhelm and frustrate him. Arun wants to impress his grandfather, his Bapu, who smells of peanut oil and takes him on walks around the ashram; and yet, Arun finds himself coming up against his own perceived inadequacies (he can’t sit still during meditation; he can’t form proper letters with the tiny pencil stub he has to use). Bapu tells his grandson to have faith and be patient, but his advice initially falls on deaf ears.

One of Grandfather Gandhi’s greatest strengths is the way in which first-time illustrator Evan Turk allows the reader to experience something as abstract as Arun’s simmering anger. Undoubtedly, an enormous part of this book’s appeal for children—why they will want to listen to this story again and again—lies in Turk’s rich, compelling collages, which combine paint with paper cut-outs and three-dimensional materials chosen to highlight aspects of life on the ashram (like tin foil to represent the tin bowls in which all food was eaten, and plain white cotton gauze for Gandhi’s clothes).

One of the materials Turk invokes throughout the story is yarn, a reference to Gandhi’s passion for his spinning wheel, which he used as a way to quiet and focus his mind. Oftentimes, though, the yarn in Turk’s illustrations is black, tangled, and wiry, spreading out around young Arun’s head as a way to signal his confusion and frustration. 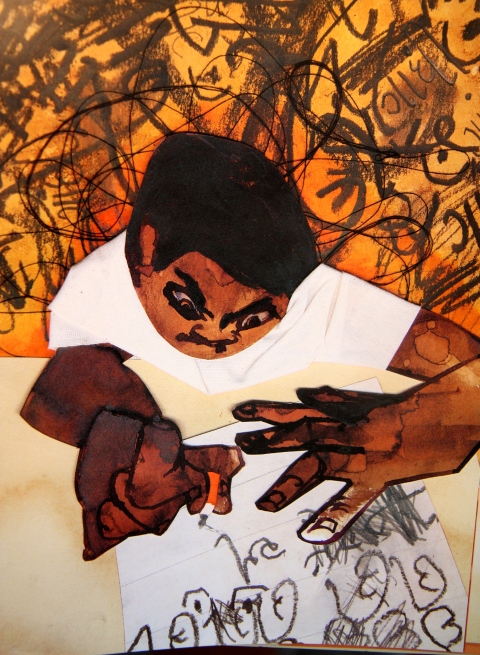 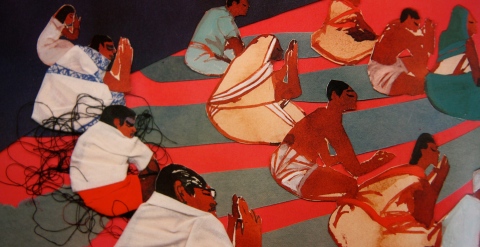 We’ve had no shortage of anger in our house this year. It never fails to stun me how my son can be smiling and calm one minute, then exploding with rage the very next: the injustice or shame or hurt spilling messily forth from his clenched fists, his leaky eyes, his accosting voice. These outbursts, however normal or age-appropriate they may be, never fail to push every button inside me, until my own anger and helplessness threaten to consume me as well—and, worse, threaten to wedge resentment into our relationship. It has been a tremendous year of growth for both of us, and we have made great strides. And in many, many instances, I have found myself coming back to this book—and to the climactic moment in which Arun’s own seething anger drives him straight to his grandfather’s hut.

Already anxious and upset by his perceived failure in the eyes of his grandfather at adjusting to life on the ashram, Arun is finally pushed to the breaking point while playing a game of soccer with some of the other children. One of the cousins shoves Arun and steals the ball, inadvertently sending Arun face down into the dirt, blood trickling from his lips. Arun stands up and snatches a rock, screaming, “You did that on purpose!” His cousin tells him to calm down. “But I didn’t want to calm down. I wanted to throw the rock, to hit Suman, like he hit me.”

There is not a living being who cannot relate to this desire for retaliation.

Arun is convinced that his angry reaction in the soccer game only confirms that he doesn’t fit with the peaceful values of his family and the ashram. How could he, a Gandhi, be so easy to anger? Arun drops the rock and runs to find his grandfather, the great Teacher of Peace.

“Do not be ashamed, we all feel anger.”
But that wasn’t possible. Suman and Kanu, maybe, but not Grandfather.
“Even you?” I asked.
“Even me,” said Grandfather.

Gandhi then introduces the boy to the spinning wheel, and as their fingers go to work, Gandhi tells him that anger is like electricity: “Anger can strike, like lightning, and split a living tree in two.”

“Or it can be channeled, transformed. A switch can be flipped, and it can shed light like a lamp…Then anger can illuminate. It can turn the darkness into light…Arun, we can all work to use our anger, instead of letting it use us.”

Gandhi doesn’t shame his grandson. He doesn’t judge him. He does what we as parents are told to do in today’s parenting books: he validates Arun’s emotions; he helps him understand that what he is feeling is part of being human. But Gandhi also invites the boy to choose—then and forever—between lightning and light, each time he feels the anger rising inside of him.

I was so moved by the way in which Grandfather Gandhi, not only humanizes for our children a great historic leader, but also presents a rich metaphor for how we might handle our own experiences of anger—that I was ecstatic when our local bookstore (Hooray for Books!) offered to bring the book’s co-author, Bethany Hegedus, to my son’s Montessori classroom. (Through this exercise, I’ve learned that Maria Montessori and Gandhi were good buds, which explains why my son is given knitting and crocheting to do in school, whenever he needs a break.)

As we prepare to wind down the year, to welcome the holidays surrounded by loved ones, to stare up at the clear, star-filled night sky and pray for a more peaceful future at home and on the other side of the world, I want to leave you with this picture of my son and his classmates listening, transfixed, as Ms. Hegedus reads from her book. These boys and girls—along with their peers around the world—hold great power in their hands, as do the adults who model for them. We can let our anger consume us, inviting more violence, more tragic crimes against humanity; or we can channel kindness and tolerance and forgiveness. We can choose light. We can choose peace. We can choose a future together. 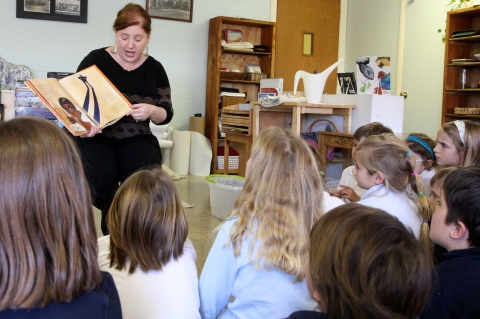 I wish you all a blessed holiday and a peaceful 2015.

You are currently reading Gift Guide 2014 (No. 6): For the Future World Leader at What to Read to Your Kids.