Friendship is Not Wasted on the Young

My daughter has had the same best friend for nine years. She met her when she was just beginning to run and climb, when I used to swing by our local playground—what we called the “Tot Lot”—after dropping her brother off at preschool. It was an instant connection, the likes of which I had never experienced with my son, and it stopped me in my tracks. Child development literature would have placed my daughter squarely in the realm of “parallel play.” So how to explain that she never let fall the hand of this other little girl, that they climbed and descended the small slide, crawled through plastic boulders, and scampered up and down artificial hills as one?

After spending nearly every day together for years, the girls don’t see each other as often now; they live about an hour apart. Still, when they get together, they pick up like no time has passed. They disappear into their own world: talking in whispers, inventing elaborate games, often so wrapped in each other’s arms that it’s hard to tell where one stops and the other begins. To witness their togetherness feels like being in the presence of something magical, something almost miraculous.

Julie Fogliano and Jillian Tamaki’s my best friend (Ages 3-7) came out only a week ago, but so enthusiastic has the response been from the kid lit world, I feel like the last person to sing its praises. (Still, wild horses couldn’t keep me from joining in the fun.) An homage to the giddy abandon exhibited in early childhood friendships—particularly those born on the playground—the book has all the makings of a classic. Fogliano’s free verse sings and soars with the stream of consciousness of a child tasting the deliciousness of friendship for the first time. (i have a new friend/ and her hair is black/ and it shines/ and it shines/ and she always laughs at everything) Tamaki’s muted palette of rusty pink and olive green lends the book a timeless, vintage feel, while the figures themselves spill and explode off the page, their excitement literally uncontainable.

END_OF_DOCUMENT_TOKEN_TO_BE_REPLACED

At Last, Something for the Youngest Sibling

One book that all the Book People will be talking about this holiday season is Abby Hanlon’s Dory Fantasmagory (Ages 5-9), an illustrated early-chapter book featuring one of the spunkiest, most imaginative, most genuinely real six-year-old girls to grace the pages of children’s literature. (After all, it was written by a former first-grade teacher.) If you really want to impress people with how in the know you are, you should buy the book this month, instead of waiting until next month, and then you should give it to everyone you know—regardless of whether it’s their birthday or not. Just a thought.

It’s possible that I’ve lost perspective on this 153-page gem, because I have, by request, read it upwards of ten times to my four year old in the past month (and don’t think that her seven-year-old brother doesn’t listen in at every chance he gets). I’m beginning to feel like Dory (nicknamed Rascal) and Emily are actually the same person (wait, are they?). Both talk to themselves incessantly, invent wild fantasies in their play, wear strange things around the house, and will stop at nothing to get the attention of their older siblings. I don’t think that Emily has a bearded fairy godmother named Mr. Nugget, or that she believes there are at least seven (mostly) hospitable monsters living in our house…but then again, I can’t be sure. END_OF_DOCUMENT_TOKEN_TO_BE_REPLACED 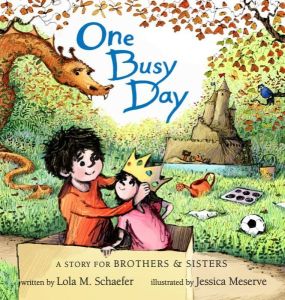 I’ll never forget the first time it happened. JP was four, Emily was a little over one, and I realized that 45 minutes had passed and there were still only happy voices in the other room. I called a friend: “The kids are playing together! ON THEIR OWN! For like a really long time! I’m just sitting here reading a book!” (Well, technically I was talking on the phone, but the point is that I could have been reading a book.) And that’s when it hit me: this is why some people have more than one kid (or more than one dog, cat, or fish).

Watching siblings play together is one of the most endearing and gratifying experiences for a parent. (Well, until it all goes south—which it inevitably does—usually right at the moment when you have finished the dishes, wiped down the lunch table, dust-bustered the floor, and finally sat down on the sofa to page through a magazine.) But when the stars do align, as they increasingly do with age, it is in these moments that I get the clearest glimpses of my children’s budding personalities, of the people they will someday become. I see tenderness and compromise in my now six and a half year old boy, amidst the bossiness and tendency to escalate play into some form of physical combat. And in my now three and a half year old daughter, I feel her excitement, her sheer pride, in the way she confidently prattles on after her brother agrees, “OK, you can be the mommy bird, and I’ll be the baby bird.” Because, really, is it not the best feeling in the world when that older brother whom you revere in every way decides to drop everything for you?

Imagination is the great equalizer in sibling play. In the world of pretend play, it doesn’t matter how old you are. Enter Lola M. Schaefer and Jessica Meserve’s latest picture book, One Busy Day: A Story for Big Brothers and Sisters (Ages 2-6), in some ways a sequel to their first book, One Special Day, about the moment in which a little boy becomes a big brother. END_OF_DOCUMENT_TOKEN_TO_BE_REPLACED

You are currently browsing entries tagged with play at What to Read to Your Kids.