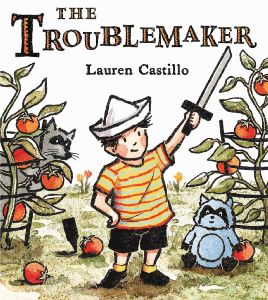 Every spring and fall, there are a few weekends where my husband and I become so absorbed in the Giant Time Suck that is yard work, that we essentially ignore our children. Going into these weekends, I always envision this picture of domestic bliss, where JP and Emily will be working alongside us, shoveling heaps of mulch into the flower beds, or hauling handfuls of leaves into bags (because aren’t kids supposed to relish any chance to be around dirt, not to mention dangerous tools?). Quickly, though, our kids tire of manual labor; their attention wanes, and they’ll announce, “We’re going inside,” where they will drag every toy into the center of the living room and play, largely unsupervised, for hours. I say largely unsupervised, because I don’t want you to think that I’m completely negligent. Sometimes I look in the window to discover that they have prepared themselves lunch (oh, is it that time already?).

But in all seriousness: isn’t it astounding how much we can get done when our children are off entertaining themselves? And yet, no good thing lasts forever, and there is that moment—it might come after three minutes, it might come after three hours—when it all goes to pot. When boredom begins to rear its ugly head, and the temptation to Make Mischief takes over. And when you’re a big brother, and you have at your disposal an unsuspecting little sister, this temptation is often too much to resist.

So it is perhaps no surprise that our entire family—especially the aforementioned little sister—has become fans of Lauren Castillo’s The Troublemaker (Ages 3-6). In this charming story, a boy and his stuffed raccoon surreptitiously kidnap the little sister’s stuffed rabbit and set it blindfolded and sailing across a pond, all while the parents are harvesting tomatoes (see, it’s not just me). “When Mom found out, she was NOT happy”; hands on hip, she prompts big brother to return the now soaked bunny with an apology, then “stay here in the garden, where I can keep an eye on you.” In a delightful twist,  Trouble then assumes a new face, that of an actual raccoon, who creeps up to steal, not only sister’s bunny, but also Rascal, the boy’s stuffed raccoon and original troublemaker. Therein unfolds a quietly suspenseful and highly amusing family drama of confusion, mistaken identities, and, eventually, reconciliation.

Lauren Castillo has been illustrating picture books for awhile (delights like Amy Hest’s The Reader and Kate Banks’ City Cat), but she has only in recent years begun writing them as well. We need to keep our eyes on her, folks, because she is the real deal: a watercolorist, who not only beautifully captures the innocence of childhood, but also knows how to strike the perfect marriage between illustration and text. Like many of the greats—Mo Willems, Peter Brown, Peter McCarty, Oliver Jeffers—Castillo chooses only the bare minimum of words to tell her story, nudging the reader to glean the full plot from clues in her pictures. For example, only the illustrations reveal that, the second time around, the troublemaker is actually a living, breathing raccoon—and not the boy or his stuffed accomplice at all. Catch the paw reaching in from the left, unbeknownst to the boy:

For such sparse text, Castillo still manages to pack an emotional punch. First, we have the boy’s frustration at being falsely accused by his mom (“‘Did you take the bunny again?’ ‘Wasn’t me!’ But they didn’t believe me.”). By painting the mother and sister as strong menacing silhouettes in the foreground, Castillo brilliantly conjures up the boy’s feeling of being ganged up on. Later, Castillo gives us a window into the boy’s new-found empathy, when he realizes that the culprit has stolen his toy as well as his sister’s—and that his sadness is akin to what his sister was probably feeling all along. All this is done with very little explanation—and with absolutely no moralizing—and it’s for precisely this gentle handling, that the story resonates so strongly with the child reader. 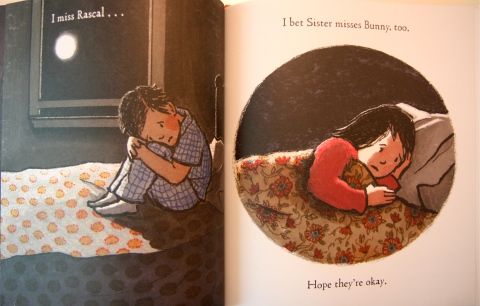 (I feel the need to pause here and point out that the presence of raccoons likely contributes to our family’s obsession with this book. Beginning two years ago, when we first moved into our current house, we have had an endless parade of raccoons that climb up our siding each night and walk around on our roof. No amount of trapping has curbed this problem. They just keep coming. And my children are so keenly aware of this occurrence—well, mainly because their mother has been driven to near sleep-deprived lunacy over it—that Emily has started talking about an imaginary raccoon who visits her at night to have “little chats” (I pray it is imaginary, because with our luck you never know…).)

But whatever the reason our little ones are drawn to this story, there’s no denying that it is a perfectly-crafted gem: a story that delights, that surprises, that resonates—and whose ending will have everyone giggling. And really, if all that is born out of boredom, then it can’t be that bad to ignore our children once in awhile. Are you with me?

A Few Other Favorites About Mischief-Making:
Where the Wild Things Are, by Maurice Sendak (Ages 3-6)
Naughty Kitty!, by Adam Stower (Ages 3-6)
This is a Moose, by Richard T. Morris & Tom Lichtenheld (Ages 4-8)
The Dunderheads, by Paul Fleischman & David Roberts (Ages 6-10)

You are currently reading Mischief Making at What to Read to Your Kids.