For many of us following stay-at-home orders, social media is a welcome lifeline to the outside world. And yet, its lure can be as powerful as its trapping. If occasionally I used to fall down the rabbit hole of comparing my children’s accomplishments to those paraded out on Facebook, I now find myself in weaker moments comparing houses. We may be leading similar lives—working, schooling, eating at home—but our backdrops are wildly different. Maybe I’d be going less crazy if I looked out my window and saw mountains. Sure would be nice to have a swimming pool in my backyard. Sure would be nice to have any backyard. Oh man, are they at their river house right now? I’m sure I could homeschool better if we had a creek.

Of course, these thoughts are inane. Inanely unproductive. Inanely indulgent. At no time for my generation has it been more of a blessing to have our health and a roof over our heads. Not to mention money for food and ample time to steer our children through these rocky waters.

Still, I would be lying if I said there aren’t cracks in my resolve to be gracious and mindful.

With our recent move, our living space has been significantly downsized. I can’t spit without hitting another person. Heck, I can hardly do anything without being watched or whined at. My husband gave me grief for packing up no fewer than four boxes of books to bring with us to these temporary digs. But you know what? We are rich in stories. We have stories painted with breathtaking backdrops, stories which quicken our pulse or tug at our heart or seduce us with beauty…all from the cozy confines of our couch. Some days, I look at the piles of books haphazardly lying around and I think, Why does no one clean up? Most days, I look at them and think, We are the luckiest.

One need look no further than Aesop’s fables for proof that stories have long been offering hope in turbulent times. Tales like “The Lion and the Mouse” (or my favorite as a parent, “The Boy Who Cried Wolf”) have been told and retold around the world for 2,500 years. Until now, I didn’t realize that the allegedly true story of Aesop himself—a slave in Ancient Greece who earned his freedom through storytelling—also bears telling, lending meaningful context to Aesop’s beguiling fables while offering proof that stories are richer than gold.

Ian Lendler’s 63-page trove, The Fabled Life of Aesop (Ages 5-9), luminously illustrated by Pamela Zagarenski, is not your typical picture book biography. It’s more of an anthology of fables encased in a broader, biographical context. Like an onion, each turn of the page reveals another layer of story and art, the sum of which is one of the most spellbinding books of 2020. It can be read in a single sitting or paged through out of order. If we’re talking about losing ourselves in the sublime for a time, this is just the ticket.

Fables—loosely defined as talking-animal stories which impart some kind of moral or lesson—gained popularity in 700 BCE. Ancient Greece may have been the birthplace of fables and a myriad of other art forms, but it was also built almost entirely through slavery. As Lendler points out in the book’s Afterward, if we consider Aesop’s fables through the historical lens of slavery, they become more than entertaining vignettes: they offer “practical advice in how to survive in a world in which some have power and some do not.”

Aesop was someone without power. “One day, a slave was born,” the story begins. In Ancient Greece, records of individual slaves were nonexistent —“no one recorded the history of slaves”—so what we can piece together about Aesop’s birth and life comes mainly from oral histories and the occasional written reference. But the story goes that Aesop was taken from his parents and “sent to work in the grape fields of Samos, a hot, dry island in the Mediterranean Sea,” where he learned that slaves could not speak freely. They had to speak in code.

For Aesop, that code became stories. Want to gossip with your fellow slaves about how badly your master’s feet smell? Tell a story about a thorn in a lion’s paw. Want to convince your master to pull you from the fields and let you help run his business? Tell a story about a tiny mouse whose size allows him to discreetly chew through the net that traps a mighty lion. “Very clever indeed,” Aesop’s master replies. “Come work in my house, little mouse. You can chew on any nets that trap me.”

Aesop spins tales to help his master keep peace with his enemies. One of these enemies, named Jadon, is so enthralled with Aesop’s stories that he buys Aesop and brings him to live with him. “You see, no matter how clever or kind Aesop was, he was still just a slave and slaves were something to be bought and sold.”

Under his new master, Aesop creates most of the stories we still tell today. Stories about “sly foxes, foolish farmers, or clever mice,” which warn against greed, show the value of hard work, and laud kindness. But many of these stories carry hidden lessons as well. Read closely, they impart advice about “how to survive in a world that was sometimes unjust and cruel.” They may have been stories commissioned by the wealthy, but they are stories for the masses.

And then, like the wielding of a wand, we experience this magic on the physical page. Up to this point, aspects of the fables have been woven seamlessly into Aesop’s own story. Now, however, the reader comes upon a “book within a book,” its glossy pages and full-color bleeds indicative of a format change. These are Aesop’s fables themselves, shortened by Lendler to one or two pages each, and as enchantingly illustrated as anything I’ve ever seen. Pamela Zagarenski is no stranger to this blog, but it turns out I’ve been waiting all my life to see her illustrate Aesop’s fables.

Zagarenski’s sweet spot has always lain in magical realism, and these anthropomorphized animals—some proper and some silly, some strange and some familiar—brilliantly come to life against surreal washes of colors, geometric forms, and some of Zagarenski’s trademark props, like balloons and clocks and pinwheels.

Many favorites are here: “The Tortoise and the Hare,” “The Fox and the Grapes,” “The Town Mouse and the Country Mouse,” “The Ant and the Grasshopper,” and “The Boy Who Cried Wolf” (phew).

There are many, too, which are new to me and my kids. “The North Wind and the South” is now a favorite, its moral spelled out at the fable’s conclusion as People respond better to kindness than to force. Ditto to “The Donkey and the Lapdog,” whose lesson feels especially on the nose with our social media obsession: Don’t try to make others like you by being something that you’re not. 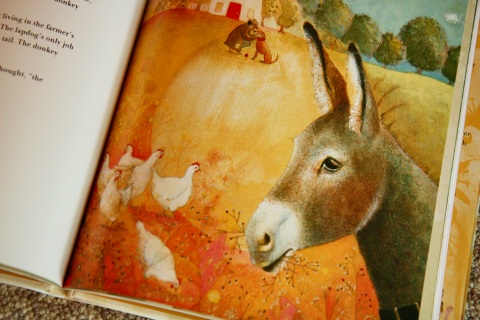 Just. look. at. this. art. It delights; it transcends. It’s bizarre in all the best ways.

And then, just as quickly as the fables start, they’re over…and we’re back in the story of Aesop himself, still enslaved by Jadon, but older. Jadon credits Aesop and his storytelling with guiding him towards a life of respect, wisdom, and generosity.  Not to mention wealth. He asks Aesop if there is something he, in turn, can do for the slave. Aesop responds by telling his most important story to date: a story of a house-dog who comes upon a wolf “weak with hunger.” The dog promises the wolf all the food he could want if he’ll only agree to live like him, a domesticated dog with a collar. The wolf briefly considers before replying, “I would rather starve while I’m free than be well fed in chains.”

Aesop tells this story, his master listens, and the rest is history. Aesop is freed and his stories are freed. Free to travel with him and beyond him, first by mouth and later by paper, across thousands of years.

A good book encourages investigation, and if curious readers peel back the jacket cover they will find a quote attributed to Aesop: “Gratitude is the sign of noble souls.” Here’s hoping that Aesop’s life story and work inspire all of us to remember that, for many of us, our greatest treasures are already around us.

Books published by Houghton Mifflin Harcourt. All opinions are my own. Amazon.com affiliate links, although I prefer we all shop local when we can, especially now!

§ 4 Responses to Rich in Stories

You are currently reading Rich in Stories at What to Read to Your Kids.