August 2, 2019 Comments Off on Summer Road Tripping (Audio Book Round Up)

Over the past two years, owing to revolving carpools and the best kids’ podcast ever, we have listened to significantly fewer audio books. (My last round up is here). And yet, where quantity was lacking, quality was not. Is it just me, or has the audio industry really upped its game? If you’ve got a road trip planned this August, here’s hoping you find some inspiration below. Even if you’re just driving to and from the pool every day, or taking refuge at home in the AC, these performances are guaranteed to thrill and excite everyone in the family. (Parents included.)

I hate to lead with my best hand, but if you only have time for one audio series in your summer, promise me it’ll be this. Jessica Townsend’s Nevermoor series (the third releases next spring, and how shall we endure until then?) frequently gets compared to Harry Potter. While plot parallels abound, I’m not sure the comparison entirely honors J.K. Rowling’s master class at world building. That said, what I can vouch for is that British actress Gemma Whelan gives Jim Dale (HP narrator) a serious run for his money. You may know Whelan from Game of Thrones (Yara Greyjoy), but your kids are about to know her for the staggering range of perfectly-pitched voices she wields for Morrigan Crow and the rest of Nevermoor’s eclectic, unforgettable cast.

For her entire life, Morrigan Crow has believed herself cursed and unlovable: her mere presence radiates bad luck and catastrophe to those unfortunate enough to cross her path, including her father and stepmother. Like the cursed children before her, as midnight on her eleventh birthday approaches, Morrigan prepares for her inevitable death. That is, until an unflappably optimistic redhead named Jupiter North appears and whisks Morrigan off to the secret, magical world of Nevermoor. At once glittery and darkly mysterious, Nevermoor is a place of mesmerists, giant talking cats, vampire dwarfs, smoke monsters, and the elite Wundrous Society, where Morrigan will have a place if she passes a series of daring trials. Nevermoor is also powered by an elusive, unpredictable energy called Wunder—though whether Wunder will be Morrigan’s salvation or her downfall is up to her. Like Harry Potter, Morrigan learns that what defines a person, what deems her worthy of love, is not her cursed past or her discovered ‘knack,’ but the choices she makes each day. Destiny is for the taking. 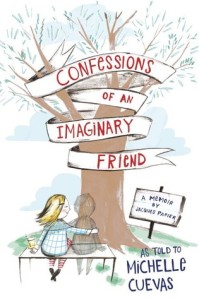 Confessions of an Imaginary Friend: A Memoir by Jacques Papier, as told to Michelle Cuevas; narrated by Michael Goldstrom (Ages 9-12)

If you like your kids’ audio books heavy on adult humor—with an existential crisis thrown in for good measure—download this gem pronto. I’m not sure I’ve ever laughed so hard cruising down the highway. (The kids found it pretty funny, too.) I had read the novel in 2015 when it was first published—a “memoir” narrated by a young girl’s imaginary friend, who doesn’t realize he is imaginary until he does, then unwittingly butts up against questions of identity and purpose—and found it wonderfully witty and clever. (An imaginary friend who needs therapy? Sign me up.)

But now I see I was merely biding my time until the audio production came out. It turns out Michael Goldstrom’s employment of an exaggerated French accent to perform Jacques’s first-person narration adds delicious absurdity to the tale at the same time that it seduces us with philosophical musings. If we find ourselves feeling nostalgic for our (or our children’s) imaginary friends, it is owing to the exceptional combination of Goldstrom’s vocal theatrics with Michelle Cuevas’ exquisite language.

You thought your kids’ summer was full of adventure? Turns out they’ve got nothing on Brian and his cousin Nora, who get lost in the woods behind Nora’s house and discover an enormous secluded wooden house, which seems to defy gravity with its ramshackle balconies and turrets jutting out at improbable angles. (“The stairs didn’t go back and forth with regular turns but were completely unpredictable, turning left and then right before curving in a circle. On every landing, hallways led off into darkness and who knows where.”) The only thing more bizarre than the house are its inhabitants: a boy named Cosmo van Dash, his madcap scientist uncles (one of whom has been missing for years inside the house), and a swarm of giant Amazonian wasps.

As listeners to this fast-paced, invitingly preposterous audio book, it’s hard to decide what’s more appealing: that we get to tag along with Brian and Nora as they spend a summer exploring the house’s quirky secret passages, or that we get to play out our own childhood fantasy of living in a house which seems to thrive on chaos and No Rules. But is life at the Matchstick Castle too good to be true? It turns out Brian and Nora’s hefty dose of sanity may be just what their new friends need to save the house from a greedy bureaucrat who wants to see it torn down.

It was one of my favorite books as a child; my daughter is horse crazy; and my son has always been lured by stories of impossible feats. By all accounts, I should have picked up Walter Farley’s 1941 classic and read it to my children ages ago. And yet, something stopped me. Maybe I was unintentionally prophetic: I knew my storytelling couldn’t rival the late great Frank Muller’s narration. Listening to Muller read this tale of a shipwrecked American boy and a wild Arabian stallion is akin to listening to E.B. White read his novels (more here). He doesn’t employ different voices for different characters. He speaks gently but authoritatively. It’s like listening to a beloved uncle tell a story from his own childhood. Everything else fades away. The story itself is the main attraction. You lean in. You want to hear more.

After all, Farley’s story is that good. High-stakes danger abounds. Underdogs become unlikely champions. The bond which develops between this quiet adolescent boy and the wildest of wild stallions, from a desert island to the New York racetrack, defies all odds. It is a bond unpredictable and commanding of respect—as any good animal trainer knows—but one which heals, nurtures, and sustains. The Black Stallion reminds us of the primal, awe-inspiring connection between human and animal. 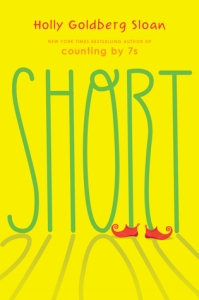 I read this book on my own when it first came out, but then my daughter’s teacher read it aloud to her class and she loved it so much she wanted her brother to hear it. As a general rule, I don’t like to listen to a book I’ve already read (too many books, too little time). But I made an exception for Short, because I can’t resist books about summer break while we’re on summer break. When Julia is cast as a Munchkin in her community theater’s production of The Wizard of Oz, which her mother signs her up for before she can protest (free childcare!), she’s convinced her summer break is doomed. Especially because the casting draws attention to her borderline dwarfism. But herein lies the magic of summer break: when we’re pushed outside our comfort zone, we grow in ways we could never imagine. (Or, as my mom used to tell my sister and me, “What doesn’t kill you makes you stronger.” Thanks, Ma.)

In my original review of Short, I wrote: “middle-schooler Julia’s witty, astute, and occasionally self-deprecating stream-of-consciousness narration grabs us right out of the gate.” In the audio version, Tara Stands nails Julia’s tween voice. It’s perfection. I can’t tell you how many audio books we’ve quit because the female narrator’s attempt at young and authentic translates as whiny and superficial (and we certainly don’t need to encourage that stereotype). Here, Julia comes across as someone we’ll be routing for through the end. 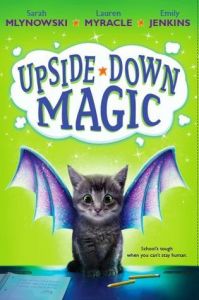 If the sign of a good audio book is inspiring a child to turn around and read the book a second (or third) time on her own, then each book in this series (the sixth drops this fall!) can be declared a great success in our house. But I’d go one step further. We don’t just adore these stores: they’ve actually helped our family re-frame how we see learning differences.

Nory Horace has a problem: her magic is all kinds of “wonky.” Unlike other students at elite magic academies, Nora’s inherited magical power—shape-shifting—doesn’t present conventionally. Despite her efforts, Nora is less likely to transform into an ordinary black cat on command as she is a beaver-kitten or, worse, dragon-kitten (dritten?). When Nora is enrolled by her family in the Upside-Down Magic program (UDM) at Dunwiddle Magic School, alongside kids who shrink the wrong things, make it rain inside, or can’t get down from the ceiling, she expects to face only more ridicule. Instead, under the guidance of their caring, patient teacher, Ms. Starr, the UDM kids begin to define themselves less by what they can’t do and more by the uniquely creative way they experience the world. It’s all tremendously subtle, of course, but I think that in the way these books celebrate out-of-box thinking, it’s possible to read them as an allegory for kids with learning or behavioral differences. At least, it worked beautifully for us.

All opinions are my own. Amazon.com affiliate links are above, although I prefer that we all shop local when we can!

You are currently reading Summer Road Tripping (Audio Book Round Up) at What to Read to Your Kids.