Gift Guide 2018: Getting Something Out of Nothing 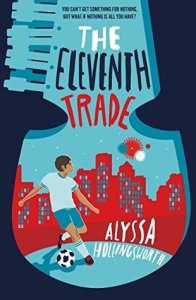 I wasn’t initially going to include Alyssa Hollingsworth’s immensely moving debut novel, The Eleventh Trade (Ages 11-14), in my Gift Guide, because it has some preeeeettttyyyy heavy flashback scenes. In other words, it’s not all Ho Ho Ho. But then I couldn’t stop thinking about it, couldn’t stop recommending it to my son and to some of his friends during carpool (a few who have just devoured Nowhere Boy, which tackles a similar subject). And then it hit me: this story is actually very much in the spirit of the holidays. It is about giving. It is about going to great lengths, making great sacrifices, in order to give someone you love something he desperately misses. And it is about what happens when you pour yourself into the act of giving. How the act itself becomes a gift—for both of you.

Sami and his grandfather are new to America, having arrived in Boston after years spent in refugee camps in Iran, Greece and Turkey, where they landed after fleeing Afghanistan in the wake of the Taliban’s attack on their family. All they have left of their family and their life in Afghanistan—a place with “beautiful mountains and blue skies and more stars than you can see anywhere on this side of the world”—is a traditional Afghan instrument called a rebab. The instrument, part of the guitar family, is the only household item the two were able to salvage in the aftermath of the bombing, an instrument which the grandfather had used to make a famed and prosperous living in Afghanistan. Once in Boston, Sami begins middle school, while his grandfather plays the rebab in the subway station, scraping together the coins and dollars people throw his way to start a new life for his grandson.

And then, in the early pages of the book, the rebab is stolen. Swiped by a teenager who pawns it. Sami’s grandfather is defeated—his only choice now is to take a job in the kitchen of a restaurant—but it’s Sami who feels his grandfather’s pain most acutely. “We lost so much when we fled Afghanistan. Sometimes I think the only thing that kept us from breaking was the rebab. It was our heart and our past, but it was also a promise. It was our hope.” Watching his grandfather “waste his hands on dirty dishes,” especially knowing it was his own carelessness that led to the stealing, propels Sami into action. He needs to get the rebab back.

With help from a classmate, who in return convinces Sami to join his soccer team, Sami traces the rebab to a local music store, where it’s on sale for a staggering $700. Sami doesn’t have a penny to his name: he and his grandfather sleep on mattresses on the floor in a single-room apartment, and it’s rare that they can afford a soda. The only possession Sami can call his own is a Manchester United key chain, which his grandfather once gifted him. When another kid at school remarks on the key chain, Sami gets an idea.

What if he can trade his beloved key chain for something else? And what if he can trade that something for something else? Could he get to $700 on trading alone? So begins a wild goose chase, one which pushes Sami outside his comfort zone, challenging his English and forcing him into contact with people he might otherwise never have the gumption to approach. Along the way, Sami inadvertently begins to build a support network in America. He begins to put words to the horrors of his past, releasing himself for this first time from his memories’ strangulation. He begins to play soccer with wild abandon and reap the effects of true friendship. All the time, he never takes his eyes off his goal of returning the rebab to its rightful owner. All the time, he keeps his actions a secret from his grandfather, hoping the ends justify the means.

If The Eleventh Trade is about giving, about turning nothing into something, it’s also about what the act of giving does to ourselves. How it changes us; how it makes us see power within ourselves. How it connects us to our loved ones and to our community in vital ways. How, in many ways, the act itself becomes more meaningful than the gift.

Published by Roaring Book Press. All opinions are my own. Amazon.com affiliate links support my book-buying habit and contribute to my being able to share more great books with you–although I prefer that we all shop local when we can!

§ One Response to Gift Guide 2018: Getting Something Out of Nothing

You are currently reading Gift Guide 2018: Getting Something Out of Nothing at What to Read to Your Kids.