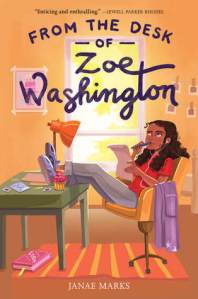 When John Lewis passed away last weekend—ending a 60-plus-year career of social activism and civil rights legislation—I was struck by how many tributes invoked the Congressman’s tweet from 2015, in which he shared a mugshot from his time in prison 54 years earlier, arrested for using a “white” bathroom in Jackson, Mississippi. The photo was captioned: Even though I was arrested, I smiled bc I was on the right side of history. Find a way to get in the way #goodtrouble

Another of his tweets in 2018 further underscores this notion of “good trouble”—a phrase Lewis became known for:

Do not get lost in a sea of despair. Be hopeful, be optimistic. Our struggle is not the struggle of a day, a week, a month, or a year, it is the struggle of a lifetime. Never, ever be afraid to make some noise and get in good trouble, necessary trouble.

If you’ve asked me for a middle-grade book recommendation in the past two months, you’ve probably heard me go on and on and on about Janae Marks’ debut novel, From the Desk of Zoe Washington (Ages 9-13). If you follow me on Instagram, you may know I chose this title for a summer book club, after my third graders (bless them) begged me to continue hosting Zoom meetings. The book was not only a favorite of the year for most of the kids, nearly every parent emailed me to report that the story was yielding rich, important, anti-racist conversations around the dinner table.

If you are looking for a book to start a conversation about systemic racism, this one’s a gem. It’s not just that it offers awareness about the bias in our criminal justice system—the story features a Black character (Zoe’s father) serving time for a crime he may not have committed—it’s that it offers hope for a more just world. It’s a story about a girl who asks hard questions, who isn’t content to accept things as they are, and who makes some “good trouble” of her own when the adults in her life fail to step up.

Of course, none of these messages would be nearly as effective if the story itself wasn’t fan-freakin-tastic. This is not a heavy-handed “issues” book. It checks every box of a perfect tween story: it’s well-paced; the protagonist is immensely likable; there’s mystery, intrigue, and no shortage of fun and relatable sub-plots (baking! music! friendship drama!). It’s a book nearly impossible to put down, but it’s also a story packed with nuggets ripe for pulling apart and discussing. Read this book to or alongside your tween; you’ll both be better for it. (And may I recommend you encourage your child to make a playlist of the songs Zoe discovers from her father, because isn’t it high time our kids started listening to Stevie Wonder? Also: Fruit Loops cupcakes. Yup, it’s a thing.)

END_OF_DOCUMENT_TOKEN_TO_BE_REPLACED

March 20, 2020 Comments Off on Moving Through Uncertainty (A Book Club Post) 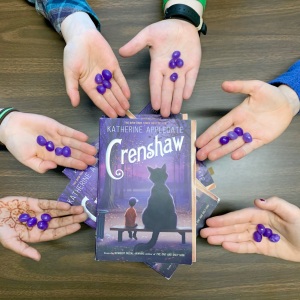 It feels unfathomable that only a single week has passed since I was in my daughter’s Montessori classroom for book club with the third graders. It feels more like a lifetime, so frequently and relentlessly has the rug been pulled out from beneath our Normalcy since then. With schools shuttered and social distancing mandated, we’re all scrambling to find some semblance of routine, to cling to optimism about our loved ones and our community, to keep from sinking into the couch and staying there for good.

Last Thursday concluded seven weeks of discussing Katherine Applegate’s Crenshaw (Ages 9-12), our second pick of the year (click here for my Instagram post on our first book), and we celebrated the way we do: with a party. Only this time the popcorn was complemented with purple jelly beans: a favorite of the oversized, outspoken, outlandish cat named Crenshaw, once Jackson’s imaginary friend, who unexpectedly (and awkwardly) reappears during his fifth-grade year.

When I chose the book, I could not have known how apt it would turn out to be for the ordeal we’re now living through. I had chosen it for three reasons. Firstly, Applegate’s short chapters and direct sentences are accessible to a variety of readers, while the nuance, maturity, and visual acuity she packs into her words create rich fodder for discussion. Secondly, if reading fiction is linked to building empathy, Crenshaw represents a rare opportunity in middle-grade fiction to step into the shoes of someone living in poverty—and to discover he isn’t that different from us. Thirdly, the humor in this story, employed to balance out the sadness, is infectious: it’s unexpected; it’s absurd; it’s cinematic. (A giant cat who enjoys making bubble beards in the bath? Yes, please.) The light in the kids’ eyes as they begged to read aloud favorite passages each week only confirmed this.

But it turns out the most powerful reason to read Crenshaw—and why you may want to read it at home right now—may be its theme of uncertainty. How do we keep going when the world stops making sense?

END_OF_DOCUMENT_TOKEN_TO_BE_REPLACED 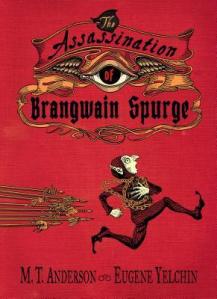 On my first day of tenth grade, which was also my first day at a new school 300 miles from home, I sat in the back row of an auditorium waiting for my mandatory “Approaches to History” class to begin. I sneaked peaks at my watch, in an effort to avoid making conversation with the students to my left and right, and because it was now several minutes past the scheduled start of class and there was no sign of a teacher.

The crowd began to quiet as the sound of yelling could be heard from the hallway. Two upperclassmen, a boy and girl, wandered into the front of the auditorium, in some kind of heated argument. As we watched, they began to shove one another, books flying, threats delivered; the girl began screaming for help. What kind of horror show have I chosen for my school? I wondered. END_OF_DOCUMENT_TOKEN_TO_BE_REPLACED

The Best Problem Solving of Our Summer 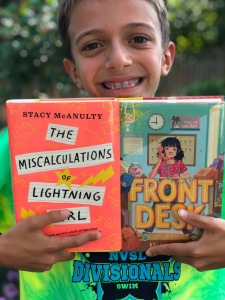 In my ongoing challenge to tempt my ten year old into inserting more literature into his self-chosen deluge of graphic novels, comics, and (understandably addictive) action-packed series by the likes of Dan Gutman, Stuart Gibbs, and Rick Riordan, I announced at the beginning of the summer that I would read Stacy McAnulty’s debut novel, The Miscalculations of Lightning Girl, aloud to him. He seemed generally unenthused with this proclamation (“Is this going to be a slow book?” he asked over furrowed brows, after he gleaned from the inside flap that there would be no spies, time travel, or epic battle scenes); but I was undeterred. You see, I’m not just used to this reaction. I’m also used to how well my plan works. END_OF_DOCUMENT_TOKEN_TO_BE_REPLACED 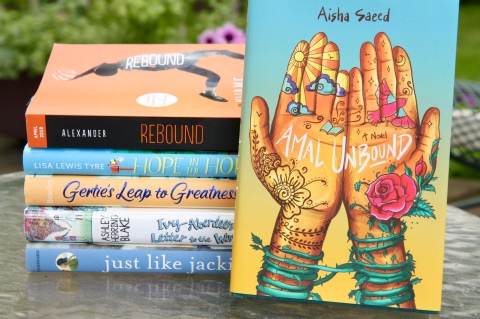 Some (ahem, grown-ups) believe summer reading should be exclusively light and fluffy. I beg to disagree. Away from academic pressures and structured sports can be the perfect time for our children to embark on uncharted territory: to push outside their comfort zones; to dabble in different writing styles; to experience characters who look and sound nothing like them; and to contemplate—from the security of the page—some of the heavier lifting they might someday be called upon to do. END_OF_DOCUMENT_TOKEN_TO_BE_REPLACED 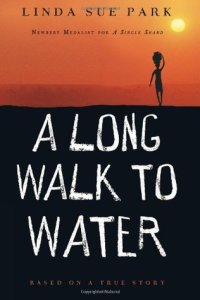 Hope, anger and determination were present in spades over the past two months, as my son and his third-grade classmates gathered for “literature circle,” a book club of sorts which I’m lucky enough to lead at their school each Wednesday. Selecting A Long Walk to Water: Based on a True Story, Linda Sue Park’s short but tremendously powerful 2010 middle-grade novel set in and around Africa’s South Sudan, was hardly unique. Part refugee story, part war story, and part exposé on contemporary life in one of the poorest corners of the world, A Long Walk to Water (ages 10-16) has long been hailed as a story which begs to be discussed in the classroom, not only for the meaningful context which teachers (or parents!) can provide to Park’s intentionally sparse writing, but also for way this particular story inspires children to want to learn—and do—more. END_OF_DOCUMENT_TOKEN_TO_BE_REPLACED

You are currently browsing entries tagged with book club selections for elementary and middle-school at What to Read to Your Kids.