The Physical Comedy of Pippi Longstocking

There was a point earlier this year, when I was recovering from the flu and still not up and about, that I found myself lying in bed, reading aloud to my kids—both of whom, instead of tucked in beside me, were at the foot of the bed, running in place on my foam roller. If you’ve ever tried running in place on a foam roller, you’ll know that it is not possible. Hence, as I was lying there reading, little heads kept disappearing from sight and then popping back up again. Normally, as a reader, this would have driven me insane. Except that this particular shenanigan seemed perfectly fitting for the reading material at hand.

It is downright impossible to sit demurely while listening to The Adventures of Pippi Longstocking (Ages 5-8 if reading aloud, older if reading independently). This beautifully bound anthology combines three of Astrid Lindgren’s unabridged 1950s chapter books (Pippi Longstocking, Pippi Goes on Board, and Pippi in the South Seas) with the ebullient, contemporary pen-and-ink illustrations of Michael Chesworth.

You see, there’s just something about Pippi—one of children’s literature’s most infamous, compelling, and downright hilarious young heroines—that invites physical participation from her audience.

For starters, Pippi herself is in constant motion. At any given moment, she’s climbing down a ladder inside the hollowed-out oak in her backyard; she’s mounting a bucking bull; she’s tying a scrubbing brush to the bottom of each foot and skating around her kitchen floor; or she’s glaring into the eyes of a hungry shark before flinging him out to sea where he’ll never bother her friends again. 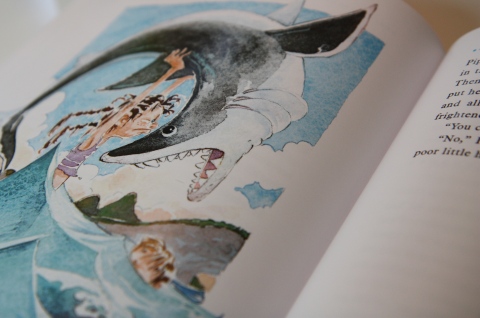 Then there’s the implicit hilarity in everything she does—humor made all the more entertaining because it’s entirely unintentional on Pippi’s part. My children have never thrown back their heads and laughed harder. “Keep reading! Keep reading!” they’d chant, when I would (horrors!) come to the end of a chapter. When Pippi heads home after an outing, she walks backwards, because it saves her the hassle of turning around. She insists on calling multiplication “plutification” and having nothing to do with it. And she cooks with pure abandon: throwing eggs up against the ceiling to crack them and rolling out cookie dough across the entire kitchen floor. Tears. My kids would laugh so hard they’d get tears.

Ultimately, the biggest reason no one can sit still around Pippi is that she defies conventions at every turn. She’s the polar opposite of ladylike, with her sticky-out braids, a patched dress she made herself, two different color stockings, and black shoes twice as large as her feet. (This last feature became a constant topic of conversation in our house: how does she pull off all those crazy stunts wearing shoes two sizes too big?).

But she doesn’t just fly in the face of gender stereotypes. She flies in the face of what it means to be a child, especially one in a society ripe with scrutiny and expectation. She’s wild. She’s fearless. She doesn’t care what anyone thinks about her. She gets into fights with policemen. She tells so many ridiculous tall tales that it’s nearly impossible to tell her lies from the truth. She’s not a superhero, but she has super-human strength, making her stronger than any grown woman or man or animal in the world.

And here’s the biggest kicker. What makes Pippi so magnetic to her young audience is that she has TOTAL FREEDOM. She lives by herself (her father is a traveling sea captain, and her mother has died)—and she absolutely loves it. In her house called Villa Villekulla, Pippi may have the company of a monkey named Mr. Nilsson, but she has no one telling her what to do, when to go to bed, or why she should go to school. She is the ultimate free spirit: a gal who wakes up, feels which way the wind is blowing, and maps out her adventure. If she wants to ride into town on her horse and buy candy for all the children, she does. If she wants to pick up and become a pirate for a few months, she does that, too. 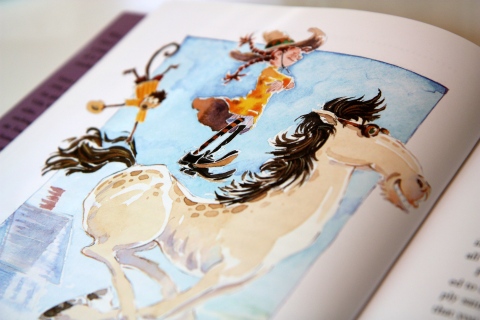 Astrid Lindren is quite brilliant with this girl-who’s-in-charge-of-herself premise. Certainly, the child reader knows that the idea is absurd (not to mention illegal)—and yet, there’s just enough about the situation that makes us entertain its plausibility. We don’t have to worry about Pippi’s safety, because her super-human strength means she can protect herself. And we don’t have to worry about her becoming impoverished, because she’s in possession of a treasure chest filled with gold.

So it could happen that she lives by herself, my children like to point out. “I think Pippi was a real girl, who lived a long time ago, and the story just kind of exaggerates what she was really like,” my seven-year-old concluded one day. “I mean, I bet she was really, really strong—but not as strong as she is in the book.”

“Do you think she lived by herself?” I asked.

After a long pause, “Yes, I think she did. I think she was allowed to, because her father would come back and check on her sometimes.”

For all her absurdity, Pippi is not all physical comedy. Her feelings are like that of any child. She is curious; she is hot-tempered; she cries over the unlikeliest of things. She heartily enjoys the companionship of the next-door children, Tommy and Annika (the very picture of convention), and she is incredibly kind and generous towards them. In fact, when seen through the eyes of her adoring friends, there’s a hint of vulnerability, of loneliness, in our heroine—the feeling that perhaps the fantasy of living on her own isn’t all it’s cracked up to be. In the book’s final chapter, as Tommy and Annika get ready for bed in their own house, they catch a glimpse through the window of Pippi sitting alone in hers, staring dreamily at a flickering candle, before blowing it out and succumbing to total darkness.

Perhaps the most lovable thing about Pippi is her genuineness. What you see is what you get. She is exactly who she proclaims to be.

On our recent Spring Break trip to Florida, the kids and I were walking down a private road to catch the sunset on the beach. My son was a few steps ahead, when I saw him suddenly stop, his mouth moving silently like he was sounding something out. And then he exclaimed:

And so it was. Or, rather, as the kids were quick to point out, someone had named their beach house after that of the spirited heroine. Naturally, there was no horse on the front porch; no tall attic harboring ancient pirate loot. But it made us smile to realize that Pippi is a character that stays with people long after they close the book. She’s someone you might not necessarily want to be (at least, not all the time); but she’s definitely someone who makes you see the fun—and the funny—in life.

Review copy provided by Candlewick. All opinions are my own. Amazon.com affiliate links support my book-buying habit and contribute to my being able to share more great books with you–although I prefer that we all shop local when we can!

§ 3 Responses to The Physical Comedy of Pippi Longstocking

You are currently reading The Physical Comedy of Pippi Longstocking at What to Read to Your Kids.