The Push-Pull of October

“I’m so glad I live in a world where there are Octobers,” said Anne of Green Gables. And so am I. No month is more bountiful. It smells fresh. It crunches beneath your feet. It’s resplendent with a beauty so striking it almost hurts.

But, even with all its treasures, October is a time of loss. Loss of light. Loss of color. Loss of those long, lazy days of summer which (thank you, September) suddenly seem like a lifetime ago. Right now in our family, this October feels riper than usual with loss, as I prepare to say goodbye to my grandmother, a woman I have loved since she first touched her nose to mine.

So, while I love books whose pages celebrate fall’s wonders (like this, this, this, and this), I also have a soft spot for books that speak to the shadows cast by fall. Beth Ferry’s quiet new picture book, The Scarecrow, gorgeously illustrated by The Fan Brothers (we would expect nothing less after this), plants the reader squarely in the push-pull of fall. Although, in fact, fall plays only a small role in the story. 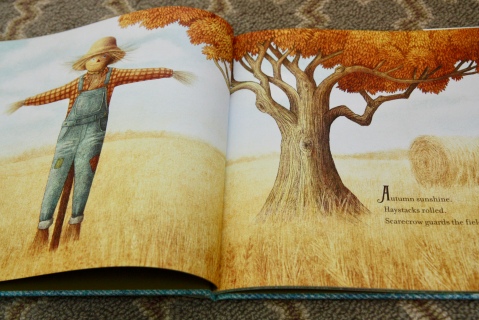 The scarecrow is a solitary figure. Erected in fall, its purpose is to stand alone, to scare away potential threats to its “fields of gold.” This particular scarecrow is no exception.

the fox and deer,

the mice and crows. 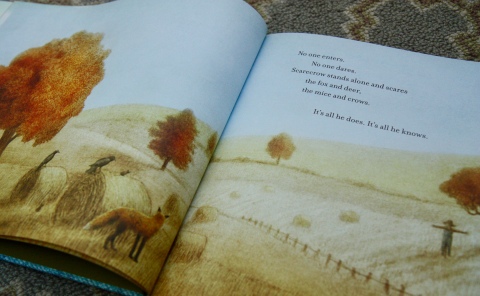 Ferry’s gentle rhymes roll effortlessly off the tongue, drawing us into the predictable rhythm of the Scarecrow: steadfast in his purpose, protector of fall’s bounty. And yet, we are asked as readers to reflect on whether it might be hard for a figure to resist companionship, day in and day out, to weather the coming winter without so much as a friend. He never rests,/ He never bends./ He’s never had a single friend. 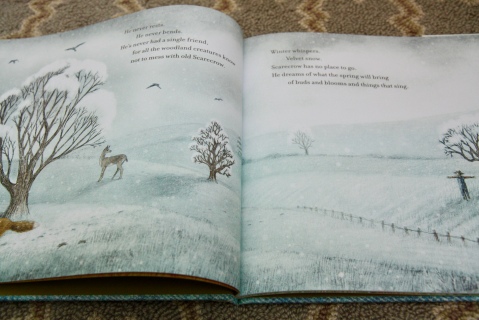 Then, as spring buds, a newly-hatched crow falls at Scarecrow’s feet (Broken nest?/ Broken wing?), and the latter does something unexpected and unprecedented. He snaps his pole,/ bends down low,/ saves the tiny baby crow. Scarecrow’s gentle straw hands pick up the crow and cradle him in the pocket of his overalls.

He tucks him near his heart of hay.

He lets him sleep.

He lets him stay.

He doesn’t stop to wonder why.

He sings the sweetest lullaby.

Might I point out that my daughter tucked her little self into my arm ever so tightly as I read this passage? Might I mention that I relish any opportunity to cuddle with my just-turned nine year old? One of many reasons why this book will forever have my heart.

In the instant that Scarecrow alters the integrity of his pole, he alters the course of his life. As the crow strengthens, the two play and laugh and make wishes in the twinkling light of summer fireflies, forgetting for a spell “who they really are.” Because, of course, in addition to their supposed to being more foe than friend, “crows are birds and birds must fly.”

Though “pleased and proud” that the crow should fulfill his purpose, Scarecrow watches in the late summer sunshine as his friend flies away. As the newly-colored leaves of “autumn’s chill” decorate his straw hat, Scarecrow faces the enormity of his loss.

Once more, winter returns. This time, our hearts break alongside Scarecrow’s. Broken heart./ Broken pole./ Nothing fills the empty hole.

Of course, this is a children’s story, and all children’s stories are obliged to end with hope (or so says Kate DiCamillo). When the crow returns the following spring, larger and accompanied by a mate, we may not be surprised, but we are ever so relieved.

Scarecrow’s joy is tangible, as the crow announces he is back to stay and quickly offers new purpose to Scarecrow’s life. Rather than standing guard against an unknown enemy, Scarecrow will now stand guard over five eggs tucked inside a newly-made nest in his overall pocket. He will guard his found family, and in return their companionship will lighten his load, as he squares off against the elements, season after season.

It’s precisely the cyclical nature of the seasons which makes greeting October at once thrilling and foreboding. Corn mazes and apple orchards and cozy gingham flannel may abound. (Do me a favor and sneak a peek under the book’s cover.) But we also know what’s coming. We know there may be days ahead where we’ll feel like we’re stuck, bent over a pole, in the middle of a blizzard. When we feel the lonely tug of loss. Still, The Scarecrow reminds us that, even in life’s predictability, delightful surprises can happen—and some of these surprises may give a season entirely new life.

Book published by HarperCollins. All opinions are my own. Amazon.com affiliate links are above, although I prefer that we all shop local when we can!

§ One Response to The Push-Pull of October

You are currently reading The Push-Pull of October at What to Read to Your Kids.