When Bigger Really is Better

On a Saturday morning towards the end of summer, on our way to go swimming, we swung by our local bookstore, so that I could run in and grab a gift for a birthday party later that day. My kids waited in the car with my husband, and when I returned a few minutes later, they asked with excited curiosity, “What book did you get?” I told them that I had picked a brand new one, by Kim Cooley Reeder, titled The Runaway Tomato (Ages 2-6). “RUNAWAY TOMATO?!” they shrieked, throwing their heads back in laughter. And thus commenced twenty minutes of their regaling us with their own ideas of where a runaway tomato might come from and what it might do.

Perhaps it’s because our attempt at growing tomatoes this year was such an Epic Failure, that my children think the idea of harvesting gigantic tomatoes is pure absurdity. Or perhaps there is just something innately hilarious about stories starring fruits and vegetables gone rogue (Cloudy with a Chance of Meatballs has always been a favorite of JP). Either way, we had to return to the bookstore a week later to get a copy for ourselves.

The story of a tomato so enormous that it defies all human intervention, takes off down a hill and wreaks chaos on the town below, is captivating in its own right. But it’s the art in The Runaway Tomato that really stands out. Lincoln Agnew’s retro, highly stylized, and digitized pen-and-ink illustrations—saturated in tomato red—are freaking fantastic, and my kids cannot get enough of them. When JP was around 18 months old, he was obsessed with a board book titled My Truck is Stuck, by Kevin Lewis and Daniel Kirk, about a truck full of watermelons that relies on a chain of cars and trucks to tow it out of a hole. There are definite plot similarities here, because The Runaway Tomato begins with a tomato so large, so heavy, that a simple tractor is not sufficient. Even the rhyme is similar to Lewis’: “Tug and pull./ Push and shove./ Tomato’s stuck./ Still won’t budge.” But, man oh man, for as many times as I read My Truck is Stuck, I sure would’ve loved something with illustrations as eye-popping, as detailed, as awesomely ridiculous as The Runaway Tomato. Dare I say it might be impossible to dread reading this “one more time?”

As the tomato ultimately dislodges from the tractor’s hitch and takes off through the town like something out of a kitschy horror movie, there is ample opportunity for the Stuff of Little Boy’s Dreams. Police cars, fire trucks, helicopters, bulldozers, garbage trucks—if it has a wheel, it makes an appearance in this story, all in the name of trying to stop (or at least clean up after) the runaway tomato. 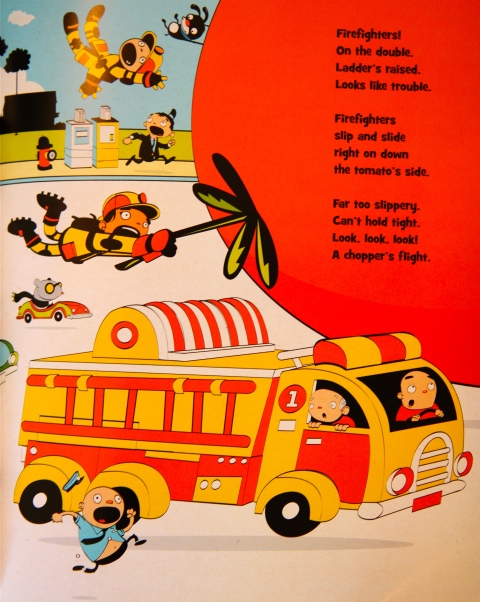 Wheel enthusiasm aside, I assure you that there is enough silliness, dramatic fold-out spreads, and even a good ‘ol fashioned dance party to make this a surefire hit with any child. As a bonus, the reader is even treated to a lesson on reproduction. Because what happens when a giant tomato’s guts are hauled off the street and deposited in the town dump? Add a little rain, a lot of sunshine (also, apparently, no squirrels anywhere to be found), and you’ve got yourself not one, not two, but a whole new crop of gigantic tomatoes: “Bumping, squishing/ down the hill./ Grab the gear./ You know the drill.”

—
Disclosure of Material Connection: I received one copy of this book free of charge from Penguin Group (USA). I was not required to write a positive review in exchange for receipt of the book; rather, the opinions expressed in this review are my own. And yes, I was then able to gift the second copy I purchased!

§ One Response to When Bigger Really is Better

You are currently reading When Bigger Really is Better at What to Read to Your Kids.