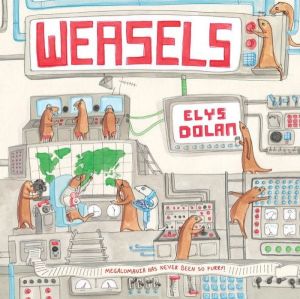 I’m sure you don’t know any kids like this, but if you did know, say, a boy who might choose the superlatives of a Calvin and Hobbes comic over the subtle description of a Great Classic; or prefer chasing his sister around with a kitchen-whisk-turned-laser over sitting civilly for tea parties; or who furiously scribbles submarines-into-blasters-into-blazing-balls-of-fire instead of serenely shading rainbows…well, let’s just say that I can promise this child—assuming you might know someone like him—the perfect present.

The brand new Weasels (Ages 4-7), by young British author-illustrator Elys Dolan, is dripping with satire—the likes of which we’ve seen glimmers of in past favorites like Battle Bunny and (most recently) Arnie the Doughnut: Invasion of the UFONUTS. Here, though, Dolan is calling out the subject matter for what it is: sheer Megalomania. (“What is that?” my six year old asked. “That is believing that you are the center of the universe and that everyone should do as you say,” I replied, refraining from adding, “That is the Deluded State of Being of All Six Year Olds.”)

So, yes, this month’s Birthday Pick, the wacky book whose praises I’m singing here, introduces children to the concept of Megalomania (not to mention Melodrama and just plain Mania). However—and here’s where us parents can breathe a small sigh of relief—it does so while poking fun at its utter absurdity. The fun begins with a fitting choice of characters: a fleet of weasels scheming to take over the world. (Oh, I’m sorry, do you think weasels “eat nuts and berries,” “argue with squirrels,” or “hide in their weasel holes?” “Well, all of these are wrong.”) The hilarious endpapers inside the front cover of the book (you may not be able to judge a book by its cover, but you can absolutely judge one by its endpapers) reveal some of the ways in which the wily creatures have been collecting intelligence: popping up in our cereal boxes, deep sea diving in our toilet tanks, and posing next to sock monkeys on our toy shelves.

The story, the entirety of which takes place inside Weasel Headquarters (part massive computer, part mad-science laboratory), begins at the critical moment in which the weasels are preparing for countdown to World Domination. Only there’s one small snafu. Precisely at the moment the button is to be pushed, the lights go out and the machine dies (further readings reveal an albino weasel tripping on the power cord), sending the weasels into pages of frantic problem solving, including inspecting the display panel (“Machine Status: It’s Broken”), running around with various power tools, accidental electrocutions, complex algebra equations, tests on bubbling green liquid, and numerous rounds of fancy coffee drinks (“You know, I’m not sure about this. I should have gotten a normal coffee.”).

The sparse, matter-of-fact narration is enhanced by the weasels’ conversations, revealed through speech bubbles with serious laugh-out-loud power, if not always for the child than for the parent (the Mastermind Weasel strokes his pet mouse in one of many Bond references). Physical distinctions like an eye patch or a safety vest or a tendency to fall asleep on the job allow kids to track sub-storylines from one page to the next—and also set the stage for mandatory re-readings. (I’ve probably read this book 20 times, but just today I noticed that the sign for poison is re-drawn as a weasel-shaped skull and crossbones.) Perhaps the biggest draw for the engineering minded (this would be my son) are the thousands of nonsensical buttons and switches, dials and gears, that make up The Machine: endless fodder for the imagination. 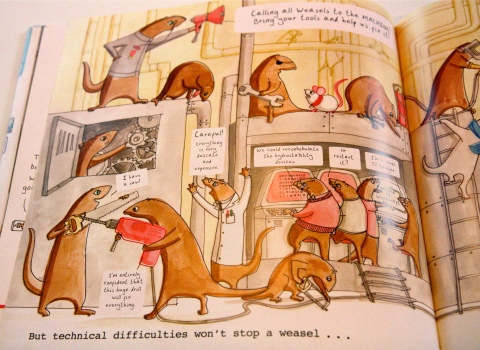 As for the question that you really want answered: do the weasels get the Machine working again and ultimately succeed in their quest for World Domination? You’ll have to get your hands on the book and flip to the endpapers inside the back cover, if you want to find out. After all, there’s no shame in a few readings of your own before you wrap it up and give it away.

§ One Response to Cue the James Bond Music

You are currently reading Cue the James Bond Music at What to Read to Your Kids.