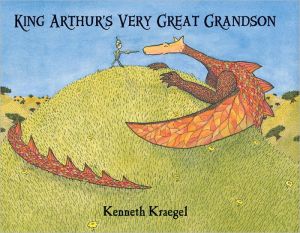 What do you buy the rough-and-tumble kid (the kid that turns everything into a sword)? And how do you simultaneously appeal to his mom, who grows a bit weary of this violent play-acting?

Never fear: everyone wins with the newly-published King Arthur’s Very Great Grandson, by Kenneth Kraegel (Ages 4-7), which is equal parts perfect for child and parent.

On the morning of his sixth birthday, Henry Alfred Grummorson is determined to honor his heritage as the “great-great-great-great-great-great-great-grandson” of King Arthur, “the noblest knight ever to wield a sword.” Armed and seated on the back of his trusty donkey Knuckles, our precocious protagonist sets off to battle the great and terrible monsters of the British countryside.

The appeal to kids is obvious. You’ve got a knight in shining armor (with a sword). You’ve got a fire-breathing dragon (and a Cyclops and a Griffin). You’ve got ten fanciful ways to say “fight” (as in, “Now unsheathe your claws and let us have ado!”). And you’ve got large amounts of text in all-caps, demanding only the most dramatic of readings (“BEHOLD, VILE WORM! I, HENRY ALFRED GRUMMORSON, A KNIGHT OF KING ARTHUR’S BLOOD, DO HEREBY CHALLENGE YOU TO A FIGHT TO THE UTTERMOST!”).

But you’ve also got treasures for Mom and Dad. You’ve got ten fanciful ways to say “fight” (it’s vocabulary building, people!). You’ve got Monty Python-esque humor. You’ve got Kragel’s swirling watercolor and ink paintings, which have a rococo quality that feels like the stuff of legends.

Best of all, you’ve got a surprise ending with a non-preachy and non-violent message about friendship. Because each time the revved-up Henry approaches his foe with the intent to fight, he gets in return an invitation to something quite different: the Cyclops challenges him to a staring contest, while the beastly Griffin encourages him to sit for a game of chess. Try as he might, Henry can’t find a single creature that wants to fight him back! And, while he knows he has shown great bravery in approaching these suspected dangers (he figures it might be even more than King Arthur himself displayed when he turned six), he ultimately decides that friendly exchanges yield more interesting results than sword wielding.

That’s right, you’ve just taught those tykes a thing or two about what a modern knight in shining armor is all about. Who’s the gift-giving hero now?

You are currently reading September’s Birthday Pick (Arthurian Style) at What to Read to Your Kids.