You’ve Got a Friend in Me

Before homework and competitive athletics, long before college essays and declaring majors, there’s preschool. And, in preschool, there’s one thing all parents hope for: that our little ones will learn how to make a friend…or two. So I can’t help but get a little choked up every time I read a story about the blossoming of a young friendship, like the one that saves the day in Otis and the Tornado (Ages 3-7), by the incredibly talented Loren Long.

Otis and the Tornado is actually the second story Long has written about an old tractor named Otis, rundown in age but not in spirit (the equally charming first book is titled simply Otis). No one can match Loren Long’s ability to engender sympathy in his readers for inanimate objects; and he does this by endowing them with a range of soft, subtle, but highly emotive facial expressions (see also his spectacular adaptation of The Little Engine That Could). Whether he looks joyful, bashful, worried, or brave, we can’t help but love this tractor and his “putt puff puttedy chuff”s (say that three times fast). Otis is also a hit on the farm, beloved by geese and sheep alike; together they enjoy hours of rounds of Follow the Leader, with everyone taking a turn to lead (it’s a regular preschool class!).

But every class has the potential for a bully, and this farm is no exception: “Everyone was so friendly, except…the bull. The bull was nobody’s friend. When he was not in his pen, he was kept in a pasture all by himself.” The bull, it seems, has brought this isolation upon himself: every time the animals approach his pen, he snorts and snarls and huffs; one time he even charged into the gate towards Otis.

Luckily, this is a story about Second Chances, and the bull gets his clean slate when a tornado approaches the farm. As the sky darkens, the farmers race down into the cellar, leaving Otis to unlatch each of the animal’s pens and lead them down to the lowest point of Mud Creek (yes, your child will now know exactly what to do in the face of an approaching funnel cloud). “But just as they squeezed close and tight, Otis heard an awful bellowing cry…the sound of a large creature in trouble.” It’s the bull, of course, and Otis must race against the clock to go back and free him before the tornado touches down.

Otis the tractor rescuing the bull

It doesn’t matter how many times JP has heard this story: when we reach this part, his body tenses in suspense, his milk cup freezes mid-sip. Time is running out, and when the latch on the bull’s pen proves stuck, Otis “threw himself into reverse, revved his engine, and charged backwards into the gate. CRASH! The gate shattered into pieces.” (Cheers erupt and JP relaxes.) Otis leads the bull to the safety of the other animals, and they all huddle in the Ultimate Snuggle. 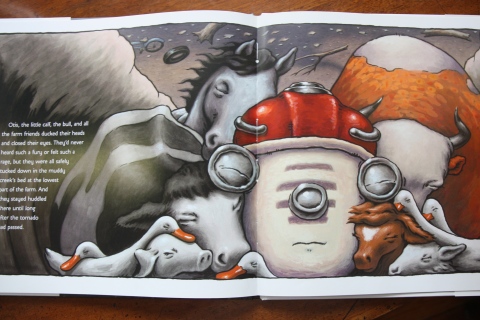 Huddled in safety from the storm (the Ultimate Snuggle)

When the tornado passes, the animals emerge to a badly damaged farm, but the narrative ends on the sweetest and most hopeful of notes: when all the clean-up is done, they have a new friend in the bull, a new buddy to join in Follow the Leader. And the bull? Well, “instead of a snarl and a glare, he wore a happy grin and a friendly gaze.” Because, really, isn’t having a friend the best? (Congratulations to this year’s preschool and pre-K graduates!)

You are currently reading You’ve Got a Friend in Me at What to Read to Your Kids.