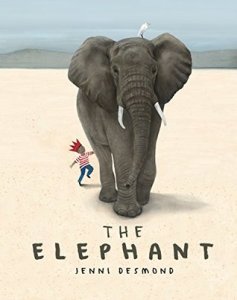 Ever since I hailed the stunning achievement of British author-illustrator Jenni Desmond’s The Polar Bear in my 2016 Gift Guide, I have eagerly anticipated the third installment in her narrative non-fiction series starring endangered animals. It has been well worth the two-year wait, because The Elephant (Ages 6-9), a tribute to the world’s largest living land mammal, is magnificent. END_OF_DOCUMENT_TOKEN_TO_BE_REPLACED

In the Absence of Words: Why Share Wordless Picture Books With Your Kids

A few days before summer break ended, a giant box arrived from Candlewick publishing, containing a number of advance copies of fall releases. Candlewick is one of my favorite publishers—also one of the most generous supporters of my blog—and the buzz in our house when one of their boxes arrives is akin to Christmas morning. The kids and I tore open the box and quickly identified new installments in some of our favorite series (the new Princess in Black comes out in November, as well as the third in the “hat” stories by the dry-witted Jon Klassen; both are fabulous).

But there was one book that—hands down!—got the loudest squeals and the highest jumps as soon as my kids laid eyes on it. Aaron Becker’s Return (Ages 5-10) is the much-anticipated finale of a wordless trilogy about a girl, her red crayon, and the otherworldly adventures to which her art and her imagination transport her (I wrote about the first title, Journey, back in 2013, before it went on to win a Caldecott Honor). END_OF_DOCUMENT_TOKEN_TO_BE_REPLACED

If you’ve been following my blog for awhile now (thank you!), it’s no secret that I like non-traditional recommendations for Valentine’s Day. In past years, I’ve typically favored off-beat stories about friendship bonds, as opposed to the saccharine hearts and hugs that publishers seem to push this time of year. I’m referring to gems such as this and these and this; and if I was going to continue my friendship trend this year, I would be singing the praises of Salina Yoon’s new lovely and understated Be a Friend.

Instead, I’ve decided that this February calls for a bit of high romance, inspired by a fairy tale that has been exquisitely re-imagined by Angela Barrett and Vivian French. I had initially intended to feature The Most Wonderful Thing in the World (Ages 5-10) in my December holiday gift guide, but I never found the right spot for it. Now, it occurs to me that I was subconsciously waiting until the Holiday of Love to tell you about a story that sings of universal love at its most transcendent. END_OF_DOCUMENT_TOKEN_TO_BE_REPLACED

You are currently browsing the Uncategorized category at What to Read to Your Kids.