Motherhood is Not a Finish Line

Last week, I was at Trader Joe’s buying flowers for my daughter, who would have the unique opportunity of performing at the Kennedy Center that evening with her community choir. My head was spinning while I was waiting in line to pay, going down the mental checklist of what needed to happen before heading to the concert hall (iron Emily’s uniform, print the parking pass, get the snacks together, etc.). Suddenly, the checkout woman interrupted my train of thought. “These flowers are such a gorgeous orange,” she remarked. I halfheartedly explained that the flowers were for my daughter, that she had a performance that night, and that orange was her favorite color. “These little joys make parenting so worth it,” she mused. “Yes,” I agreed, assuming she was talking about my being in the audience in a few hours. “It’s going to be so exciting.”

“Oh, I’m sure the performance will be great,” she replied, “but I was talking about getting to pick out flowers for your little girl.” 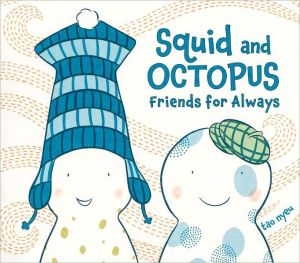 I’m a bit late with my pick for August birthday parties, but this gift will work equally well heading into the school year, because it’s a book about friendship! In Squid and Octopus: Friends for Always (Ages 4-8), Tao Nyeu is following a great literary legacy of Dynamic Duos (Frog and Toad, George and Martha, to name two favorites from my own childhood). Like her predecessors, Nyeu has packed her stories (there are four, organized as “mini-chapters” in the one picture book) with that winning combination of humor and heart. Squid and Octopus bear a particular resemblance to my son JP and his best buddy Willem: like all great friends, they argue about who is right, they make up by deciding they’re both right, they make each other laugh with silliness no parent can hope to understand, and they give each other lung-compressing squeezes that are supposed to resemble hugs.

What makes Nyeu’s book sing are her fantastical illustrations: pattern-studded silk screens made from water-based ink and colored pencils set against a simple white background. For a book about two cephalopods, living in an underwater universe complete with flower gardens, soup stands, and swing sets, one would expect backgrounds in dizzying shades of blue; but by setting her drawings on white, Nyeu focuses children’s attention on the irresistible quirkiness of the characters themselves. (I won’t say that I’m not totally attracted to the Jonathan Adler-esque color scheme of turquoise and orange as well.) As I was getting ready to write this post, I asked JP what his favorite thing about the book was. Instead of one, I got five enthusiastic points:

END_OF_DOCUMENT_TOKEN_TO_BE_REPLACED

You are currently browsing entries tagged with Tao Nyeu at What to Read to Your Kids.