2019 Gift Guide: For The Littlest Ones

The three and under set doesn’t get a lot of love on the blog these days, probably because my own kids are aging so darn quickly. But that’s no excuse. These early years are where we plant the seeds in our children for a love of stories. Plus, if you’re anything like me, these early years are when books sometimes feel like our only lifeline to sanity: no matter how much we’ve been spit up on or yelled at, falling under the spell of a story alongside our little one makes us feel like all is right with the world. If you do have a toddler, be sure to follow me on Instagram; that’s where I first reviewed many of these and where you’ll see more.

END_OF_DOCUMENT_TOKEN_TO_BE_REPLACED

Going Forth with Love 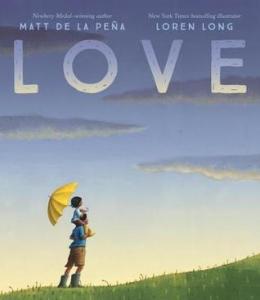 I heard a story shortly before the holidays which I haven’t been able to get out of my head. It was from an associate who serves with me on the Capitol Choices Committee. Normally, in our monthly meetings, we are all business: we get in, we debate that month’s new titles, and we get out. But, at the end of our December meeting, this librarian asked to deliver a few personal remarks. She told us how she had been in New York City the weekend prior (funny enough, so had I) and had been walking on Sunday evening to Penn Station for her train home. It was blustery, growing colder by the minute, and the streets were still dusted with the previous day’s snow. About half a block ahead of her was a man. She described him as middle-aged, well-dressed in a dark wool overcoat, and carrying a briefcase. Keeping pace behind him, she watched as the man suddenly took off his coat, draped it over a homeless man sitting in a doorway, and kept walking. All without missing a beat. END_OF_DOCUMENT_TOKEN_TO_BE_REPLACED

Hands down, my favorite day last summer was spent with my then eight year old at Ford’s Theatre, otherwise known as The Place Where Lincoln Was Shot. If there’s anything more fun than watching our children learn, it’s learning alongside our children—and that is precisely what happened as JP and I made our way through the narrative of Abraham Lincoln’s presidency, the hours preceding and immediately following his assassination, and his legacy as it lives on today.

Plugged into our audio tour—the “kid version,” where two middle-school students conversed into our ears about the different exhibits—JP and I were totally riveted: making wide eyes at one another over something that was said, or taking off our headphones for a moment to discuss something further. I felt like a kid in a candy shop, like it was the first day of a new literature elective in college and I was scanning the syllabus for all the new books I would have an excuse to buy. END_OF_DOCUMENT_TOKEN_TO_BE_REPLACED

There is a row of ginkgo trees that the kids and I used to pass every morning on our drive to school. For six years, beginning in early October, we would watch as the trees’ leaves transformed into a beguiling bright yellow—one of the purest, most saturated articulations of yellow that I have ever come across in the natural world. And still, we quivered in anticipation, because we knew that the best part was still to come.

Every ginkgo yields to the mysterious fate of losing all its leaves at the exact same moment. If you can catch the release—and we were lucky enough to do so on a few occasions—it is like a delicate rainfall of sunshine. If you miss it, you still have a few hours to catch the luminous carpet of gold that billows on the sidewalk beneath the bare boughs. It is infectious. It is magical. It softens the blow of winter’s coming and returns us to the present of fall, the most impressively beautiful of the seasons. END_OF_DOCUMENT_TOKEN_TO_BE_REPLACED

You are currently browsing entries tagged with multi-ethnic at What to Read to Your Kids.