News flash: right now, under your very own backyard or front porch, there could be as many as 20,000 garter snakes huddled together, using the body warmth of one another to wait out these cold winter months. SAY WHAT? If you think I’m exaggerating, I’m not. And now you, too, can be reminded of said news flash by your seven year old every morning as you leave the house. All thanks to one of twelve poems in Winter Bees & Other Poems of the Cold (Ages 6-12), the latest lyrical and visual masterpiece by poet Joyce Sidman and printmaker Rick Allen.

Thankfully, Winter Bees IS a masterpiece, so you won’t mind reading about snakes, which may or may not be lurking in “hibernaculums” beneath the ground on which you tread (if you remember, our snake obsession started here). Thankfully, too, most of the poems in Winter Bees are more beautiful than creepy, inspiring awe for animals like tundra swans, moose, beavers, moles, and chickadees, as well as frosty events, like ice crystal formation. END_OF_DOCUMENT_TOKEN_TO_BE_REPLACED

Making A Mess of the Alphabet 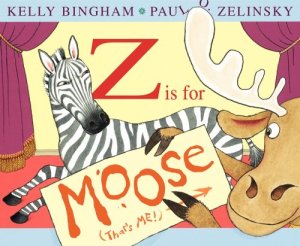 I was wrong. Occasionally, this happens. (My husband would probably debate the word “occasionally,” but this isn’t his blog and, besides, I am usually right when it comes to books.) Shortly after Kelly Bingham and Paul O. Zelinsky’s Z is for Moose (Ages 4-8) was published last year, I hastily thumbed through it at a bookstore and thought, “Another alphabet book…rudimentary drawings…simplistic-seeming text…a Bullwinkle-style moose…I’ll pass.”

Then, in January, right after the Caldecott winners were announced, the Internet was suddenly abuzz about this book: top children’s book critics were outraged that Zelinsky’s book got passed up for an award, and some went so far as to argue that it was the most revolutionary book published in 2012. “Huh?” I thought.

So ,when I happened to come across the book a second time (this time at our local library), I picked it up, brought it home, and read it to my kids. I’ll say it again: I was wrong. In my haste to judge a book by its cover, I completely blew past its cleverness, its hilarity, and its brilliant way of turning conventional alphabet books on their head.

END_OF_DOCUMENT_TOKEN_TO_BE_REPLACED

You are currently browsing entries tagged with moose at What to Read to Your Kids.