A Master Class in Mischief Making

My daughter delights in mischief. The mischief of others, that is. She, herself, may be intent to uphold a “good as gold” persona, but she wastes no time in reporting on the transgressions of others—classmates, the new puppy across the street, her big brother—with a certain giddy fascination. As I’ve mentioned in previous posts, Emily devotes large stretches of her imaginary life to contemplating the mischief made by her stuffed sheep and my stuffed bear when we’re not looking. Together, these two plush characters could be Emily’s alter ego. They subsist on a diet of gummy worms and chocolate cake. They jump out of the window in skydiving suits when they’re supposed to be sleeping. While Emily and I were in New York City last week, she claimed to spot them high tailing it down the block with a bunch of stolen balloons, on their way to throw themselves a party for their “fake birthday.”

After beating me to Mordicai Gerstein’s latest graphic novel-picture book hybrid, I am Hermes! (Ages 7-10), Emily was delighted to inform me that there exists no greater Mischief Maker in the History of the World than Hermes, Messenger of the Gods. Judging by the profusion of energy and humor in his 67 pages of comic panels, Gerstein is every bit as entranced with Hermes’ master class in mischief making as is my Emily.

END_OF_DOCUMENT_TOKEN_TO_BE_REPLACED 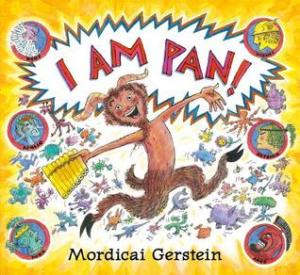 For any ambivalence I might have about summer’s arrival, my children have none. For them, summer is something to be greeted with unadulterated ecstasy—the skipping, jumping, eating ice cream, and wearing whatever they want kind. In this, they feel a kinship to a certain Greek god in Mordicai Gerstein’s wildly infectious new picture book, I am Pan! (Ages 5-10). END_OF_DOCUMENT_TOKEN_TO_BE_REPLACED

Standing Greek Gods On Their Heads

April 21, 2016 Comments Off on Standing Greek Gods On Their Heads 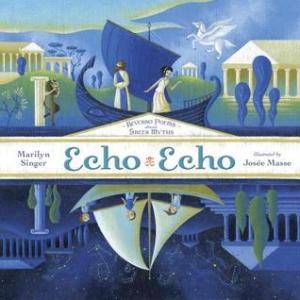 My eight year old has been on a Greek mythology craze for the past six months. For years, he has been hearing references to mythology made in his mixed-ages classroom, has been seeing classmates walk in and out of school with related books tucked under their arms, has even been listening to one classmate proclaim the pomegranate seeds in her lunch to be the “fruit of the gods”—but he has never showed any genuine interest himself.

You are currently browsing entries tagged with gods and goddesses in children’s books at What to Read to Your Kids.