If I had a dollar for every time my children tell me they are doing a science experiment, I would be a rich Mama. Most of these experiments involve putting water in a cup with some household item and sticking it in the freezer (spoiler alert: it freezes). Sometimes, usually with the help of birthday gifts, they might raise their game by building baking-soda volcanoes or citrus-powered clocks.

Our children’s natural curiosity about the inner-workings of the world has been given extra-special treatment in books this year. Today, I’ll be singing the praises of two novels for the 9-12 crowd, which seamlessly weave science into the drama of middle-school life (one stars a boy, the other a girl). For the younger elementary child, a picture book biography on Carl Sagan will prove the perfect entrée into the mysteries of the cosmos. Without further ado, let us begin.

[Warning: this book may cause your child to talk like a robot well beyond the last page.] Author Jon Scieszka, long-time advocate for the reluctant boy reader (see his inspiring tips here), embarks on the ultimate Science is Cool chapter book series, with Frank Einstein and the Antimatter Motor (Ages 9-12; younger if reading aloud). Frank Einstein is a kid-genius inventor—with a special fondness for his Grampa Al, as well as for his Grampa Al’s Fix-It! Shop (“the greatest place in the world to test any invention you might think of”). Determined to win the Midville Science Prize and reap a large cash reward to pay off Grampa Al’s debts, Frank, his best-pal Watson, and two self-assembled artificial intelligence entities named Klink and Klank (my son’s new favorite literary characters), create a Fly Bike powered by an Antimatter Motor. Naturally, all this gets complicated by Frank’s arch-nemesis: the doomsday-plotting, idea-stealing, robot-napping T.Edison. END_OF_DOCUMENT_TOKEN_TO_BE_REPLACED 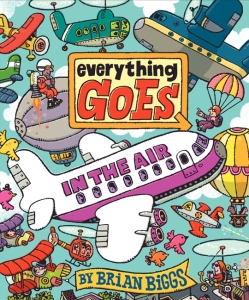 There are days, OK months, OK years, when it feels like everything is about airplanes and rockets in our house. Last year, JP chose a space-themed birthday party; this year he chose an airplane-themed one. We’ve been to air shows. I chop vegetables in the kitchen while large LEGO creations go whizzing by on little pattering feet. I have even been known to spend rainy days hanging out at Reagan National Airport, just so my kids can watch airplanes take off and land (a.k.a. Richard Scarry’s A Day at the Airport, minus the bratwurst balloon). For my five year old, it seems, life above ground is infinitely more fascinating than terra firma. And his enthusiasm is contagious: even my two-year-old daughter can’t resist squealing when she spots an airplane in the sky. Children’s bookstores aren’t lacking in books about air or space travel, but the trick is to choose ones that don’t compromise on art or narrative. At the end of this post, I’ve listed some fantastic fiction and non-fiction picture books guaranteed to wow any young aviator.

This fall, Brian Biggs came out with Everything Goes: In the Air (Ages 3-6), a follow-up to last year’s successful Everything Goes: On Land (which we also have at our house, for when we get tired of reading about planes). This is young non-fiction at its best, a perfect combo of action and information. Blending a kind of comic book layout with bright cartoon-like illustrations (think Schoolhouse Rock), the simple storyline of a father and son navigating a busy airport is jazzed up by zillions of sub-plots, from the mom of quintuplets whose babies have escaped (lots of seek-and-find opportunities here) to the pirate who’s trying to take his sword through security.

END_OF_DOCUMENT_TOKEN_TO_BE_REPLACED

You are currently browsing entries tagged with Brian Biggs at What to Read to Your Kids.