February 27, 2020 Comments Off on Concluding Black History Month on the Train

Every year, once in the fall and once in the spring, I take each of my children on a mommy-and-me trip to New York City for a long weekend in the city where I grew up. We board the train in Alexandria, Virginia and make stops in Washington, D.C.; Baltimore, Maryland; Newark, Delaware; Philadelphia, Pennsylvania; and, finally, New York City, Penn Station. My kids have come to enjoy the train ride almost as much as the destination itself, glancing up from their books to watch the changing scenery speeding by—there is something innately lolling and contemplative about train travel—and anticipating the stops to come.

These same train stops come to life against an important and fascinating historical backdrop in Overground Railroad (Ages 4-9), a new picture book by superstar husband-and-wife team Lesa Cline-Ransome and James Ransome, whose Before She Was Harriet I praised around this same time last year. “Isn’t it supposed to be “Underground Railroad?” my daughter asked, when I picked up the book to read it to her. Admittedly, I was equally stumped. As the Author’s Note explains, most people are familiar with the covert network known as the Underground Railroad, which assisted runaway slaves on their journey to the North, usually on foot. Lesser known but often equally secretive, the Overground Railroad refers to the train and bus routes traveled by millions of black Americans during the Great Migration, a time when former slaves opted to free themselves from the limitations and injustices of sharecropping to seek out better employment and educational opportunities in the North. Faced with the threat of violence from the owners of these tenant farms, who relied on the exploitation of sharecroppers for their livelihood, those who escaped often had to do so under cover of night.

Told in first-person free verse, as rhythmic and lolling as the train ride itself, and accompanied by striking portraiture and evocative washes of color, Overground Railroad tells the story of a young girl and her parents, who board the earliest “New York Bound Silver Meteor” train out of North Carolina at “crack of dawn early/ before anyone/ could see us leave.” As the Author’s Note confirms, the girl’s family is representative of the population of sharecroppers whose employers kept them perpetually in debt, making it “illegal” to leave without permission. “We left in secret/ before Daddy’s boss knew,/ before our lease was up./[…] ‘No more picking,’/ Daddy said mad./ ‘No more working someone else’s land,’/ Mama said proud.”

As the girl boards the train, clutching a shoe box containing her family’s packed lunch, she reflects on her sadness at what she has had to leave behind—her beloved grandparents, her teacher, the beauty of the Blue Ridge Mountains—at the same time that she catches glimpses of a better future. She remembers hugging Grandma (“her wet cheek/ pressed against mine”), at the same time as the train rolls past “fields with folks/ already hunched and picking/ row after row/ of cotton, tobacco, and peanuts/ every day/ except the Lord’s day/ just like my granddaddy/ but not anymore for my daddy.” 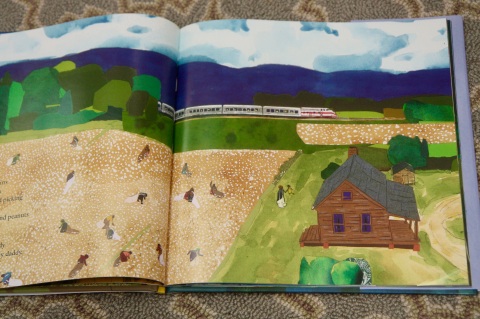 She thinks about her teacher, who pressed her weathered copy of Narrative of the Life of Frederick Douglas into the girl’s hand before she left, and decides to read the book aloud to Mama on the train, this “story of a boy/ leaving behind what he knew/ and heading to what he don’t/ just like me/ only he didn’t have a ticket/ bought by his daddy/ and food packed by his grandma.” All around her, the girl hears talk of whether “Chicago/ Detroit/ and New York City/ are The Promised Land.” 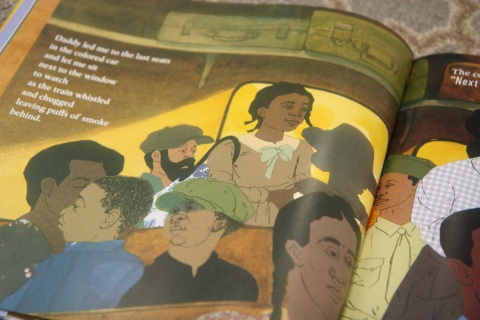 Indeed, the activity of her fellow passengers—fascinating to train travelers of any era—contains some of the most powerful clues as to the historical context of this story, a nod to the political, social, and economic divisions of the South versus North. Boarding in North Carolina, the girl’s family must take their place on the “colored car,” the girl getting one of the last seats, luckily next to a window. As the train rolls on—“Next stop Rocky Mount!” “Next stop Norfolk, Virginia!” Next stop Alexandria, Virginia!”—“more people/ and boxes/ and satchels/ squeezed into/ the colored car/ so many/ they stood/ on tired feet/ or sat/ on hard floors/ where they were.”

Around Baltimore, the porters come through the train and remove the signs saying “Whites Only,” “telling everyone in the colored section/ to sit where they want.” “We don’t have to stay/ in front behind the engine/ breathing in smoke/ ‘cause we’re past the line/ that divides black from white/ south from north/ wrong from right.” For many readers, this may be the first introduction to the Mason-Dixon line—it certainly was for my daughter—and it’s especially powerful to see it played out both literally and metaphorically on the train. At first, the girl’s father is reluctant to move. Then, in search of roomier seats, the family makes their way through the cars, including the dining car (with its “clinking glasses/ and white faces/ and good food smells”). More often than not, they are deterred by hands which move protectively over empty seats. “We walk past/ row after row/ of white folks/ who stare or turn away/ with eyes that say/ keep moving/ when they see us”: a reminder that the arbitrariness of a line does little to alter deeply ingrained prejudice.

Still, the family eventually finds “smiles/ from new neighbors,” and the girl enjoys the final few stops—”Next stop Philadelphia, Pennsylvania!”—watching the Delaware River fly past and meditating on Frederick Douglas’ secreted journey along the same river. “Mama and Daddy say/ jobs/ education/ freedom/ are waiting in New York for us./ And like the boy in the book/ we all running from/ and running to/ at the same time.” 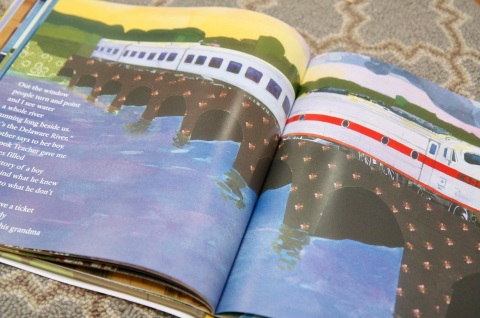 When the girl descends out of Penn Station and into New York City’s lights—“bright as a hundred North Stars”—I see reflected in her face the same wonder I see in my own daughter, each time she steps into that assault of sights, sounds, and smells, a city abuzz with an energy uniquely its own. I wonder if our annual journey might take on a different meaning for her now, following in the footsteps of those who came, not for the enjoyment of a weekend, but to forge a new life amidst uncertainty, loss, and optimism.

Review copy from Holiday House. All opinions are my own. Amazon.com affiliate links, although I prefer we all shop local when we can!

You are currently reading Concluding Black History Month on the Train at What to Read to Your Kids.