I was taken aback by their cavalier attitudes. Have even our youngest become desensitized to the horrors of this world?

But then we came upon a brief and somewhat vague mention in Park’s novel about the rampant sickness in the camps. “Wait, what kinds of sickness?” one of the children asked. “WAIT!” another interjected, reaching for a book about Kenya which he had been reading earlier. He opened to a picture of hundreds of sleeping bodies huddled together on the floor. “Remember when Salva couldn’t stretch out his legs because there were so many people sleeping next to him? What do you think would happen if someone threw up? Would the puke just fall onto another sleeping person? That would be SO GROSS! That would be the worst thing ever!”

I would never have predicted that vomit would be the key to unlocking these children’s empathy about the refugee experience. But, judging by the lengthy and animated conversation which followed, it did. And I’ll take it. Because, after that, these kids dove into asking questions and researching and brainstorming ways to help like it was their job.

It reminded me that it is our responsibility as parents and educators to throw as much (age-appropriate) content at our children as we can—because you never know what will stick.

Gene Luen Yang, this year’s National Ambassador for Young People’s Literature (and author of the Secret Coders series, a favorite of my nine year old), has issued a summer reading challenge titled Reading Without Walls. Enthusiastically adopted by schools, libraries, and bookstores (local Alexandria folks, check out Hooray for Books’ “Reading Without Walls” Bingo Cards), the challenge asks children to choose books this summer which fall outside their comfort zone. Specifically, books featuring characters “who don’t look or live like you” or “topics you don’t know much about.”

I challenge us parents to do the same when reading to our children this summer. And I have just the book (actually, series) to start you off. The Banana-Leaf Ball: How Play Can Change the World (Ages 6-12), by Katie Smith Milway, stunningly illustrated by Shane W. Evans, is the latest in the CitizenKid series. Intended to “inform children about the world and inspire them to be better global citizens,” the CitizenKid books are meaty, non-fiction picture books for the older elementary child—many of them with supplemental and actionable Afterwards—with stories about ordinary people making a difference, often in neglected corners of the world. For our children, these books are the closest thing to traveling around the world and experiencing firsthand that what they see here in America is not necessarily the reality elsewhere. (One favorite, The Red Bicycle­, which traces a bicycle from America, where a young boy has grown out of it, to West Africa, where a young woman re-purposes it to carry sick people to hospitals, inspired my children last year to donate their old bikes to a local bike shop which participates in a similar program sending discarded bicycles overseas.)

Maybe it’s the timely theme of refugee camps, maybe it’s the fact that both my kids are giddy about soccer right now, or maybe it’s the dramatic, pulsating illustrations by the great Shane W. Evans (you’ll remember how much we loved Lilian’s Right to Vote), but The Banana-Leaf Ball is a particularly special addition to the CitizenKid lineup. Based on a 1993 true story similar to Salva’s, the book tells of ten-year-old Deo, who is forced to flee his East African home in the middle of the night when war breaks out. Deo becomes separated from his family, nearly starves to death, and eventually ends up in a refugee camp in Tanzania. And that’s all in the first two pages.

The rest of the book takes place in the camp, where shy, reserved Deo initially keeps to himself, anxious to avoid the explosive squabbles which frequently break out when resources are scarce. “He especially avoids Remy, a gang leader who picks fights and bullies other students into giving him whatever they have—food, pencils, paper, spoons.”

One of the hardest things, I think, for children (even adults) to appreciate is that many refugees have led full lives before they were forced from their homes with only what they could carry on their backs. They had gardens with food and chests with family heirlooms. They lived among family and friends and laughed and felt jealous of their older siblings and jumped up and down when their parent came home from the market with treats. They played sports.

We get a glimpse into what Deo’s life once looked like through his determination to salvage one particular piece of it: his love of soccer. Forced to leave behind his cherished soccer ball—handmade from carefully wrapped banana leaves and twine—Deo sets his sights on weaving a new one. When Remy steals the banana leaves out from underneath him, Deo only becomes more determined, working in secret and later hiding the finished product.

But Deo soon realizes it’s what the ball represents that is truly worth saving. At the camp’s school, a coach organizes a soccer game, choosing Deo as captain of the Shirts Team after the coach throws him the ball and Deo instinctively “catches it on one knee and bounces it knee to knee, foot to foot and down to the ground.” To Deo’s dismay, the bully Remy is also assigned to Deo’s team and immediately begins threatening Deo under his breath. 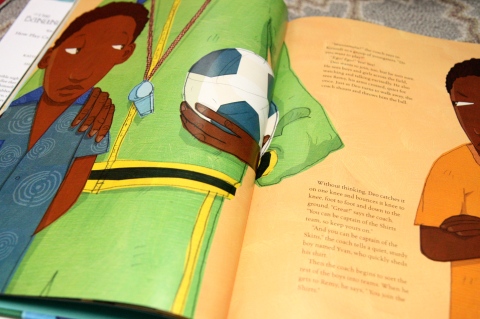 And yet, when the game begins, all differences are set aside under the common objective of scoring. The boys not only quickly discover each other’s strengths (Deo is skilled, but Remy is fast), but they capitalize on them to win. Deo kicks high to Remy, who heads the ball into the goal.

The boys’ teamwork on the field begins to extend into daily life. Remy asks Deo to teach him his soccer “tricks” outside school hours. When Deo’s ball breaks, Remy pulls the elastic band out of his own pants so Deo can repair it. Deo in turn offers comfort when Remy confides about his grief at losing his parents in the war.

Eventually, the two begin to teach other children in the camp how to make banana-leaf soccer balls.

Ball by ball, practice by practice, children who were once afraid of one another laugh together. There are still problems in the camp, but no one feels alone anymore. They are like a team, and their hope for ejo, tomorrow, is becoming hope for ubu, now.

As the story ends, we learn that Deo eventually reunites with his family and returns home when peace comes. But the camps have altered the course of his life in one critical way. Having experienced firsthand the power of play to unite and heal, a now grown-up Deo decides to coach sports in his village. In the powerful Afterward, we not only learn more about the real Deo’s story, but we see a photo of him coaching next to a close-up shot of  banana-leaf balls, which still today he teaches local children how to make. 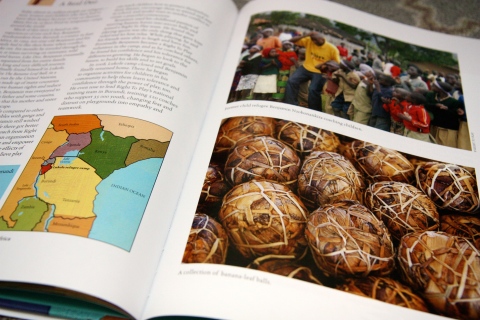 On a personal note, while I had planned to write this post several weeks ago, it now seems all the more poignant in the aftermath of the recent shooting at the Congressional baseball practice, which took place in my own community, adjoining the very fields where my daughter played soccer this past spring. At a time when our politics feel painfully divisive, the Congressional baseball game is a shining example of the transcendent possibilities of play. May we teach our children never to run from their instinct to play, simply for the love of it, simply for the love of sharing that love with others. At our core, we are more alike than we are different.

Book published by Kids Can Press. All opinions are my own. Amazon.com affiliate links support my book-buying habit and contribute to my being able to share more great books with you–although I prefer that we all shop local when we can! I myself purchased this book–and had it signed–at a fantastic diversity panel hosted by Politics & Prose bookstore in Washington DC.

You are currently reading Reading Without Walls (Summer Reading Challenge) at What to Read to Your Kids.