Last year, I made the mistake of telling my kids that, since they don’t do much in the way of summer camps, they could choose something to purchase on different weeks of summer break. It started innocently enough: they chose a World Atlas the first week and followed that with a set of colored pencils, an electric pencil sharpener, a sprinkler, and so on.

But here’s the problem. This excitement of NEW THINGS has not only stayed with them, it now trumps nearly every thought they have about the approaching summer. We still have three more weeks of school, and yet they manage to bring up the subject of “what we should buy this summer” almost every day. We have enough toys and crafts to keep them occupied all day, every day, for a lifetime of summers. Yet, somehow, in my primal, deep-seeded desire for self-preservation, I too quickly grasp at straws to avoid that dreaded “Mommy, I’m so bored.”

I’ve seen what my kids can do with a pile of stuffed animals and two sheets—heck, I’ve even watched them play Tic Tac Toe on the living room floor with masking tape and kitchen cutlery—so I should know that they can do this. Heck, I do know it. They can battle boredom. I’ve seen it time and time again. And yet, the mere thought of little hands hanging on me and little voices whining for another snack and little feet pattering on my heels as I try and straighten the house—all of these the predictable precursors to the creative process—make me want to get out my wallet and head to Target.

Thankfully, we have books like Elizabeth Orton Jones’ Twig (Ages 7-9, or younger if read aloud) to remind us of what fun can be made out of what is already on hand—that is to say, out of almost nothing at all.

Originally published in 1942, re-released in 1970, and then updated with an introduction from the author in 2001, Twig has every ounce of the nostalgia, charm, and quirkiness that we would expect from a 70-year-old chapter book (although, arguably, it does romanticize poverty to a fault). Hilarious blog posts like this one aside, we should perhaps take a page out of the parenting books of our own childhood, when we tromped around the backyard with skinned knees and itchy bug bites and our parents seemed almost surprised to see us at the end of the day. Magic almost always happens in children’s stories when the parents turn their backs.

Parents of fairy lovers rejoice! I have a found you another chapter book, which—like our beloved The Night Fairy—is based in the natural world, is beautifully told, and stars characters every bit as innocent and genuine and likeable and funny. Take a look at Twig‘s Table of Contents and tell me you don’t want to start this story at bedtime tonight.

The author never comes out and says it directly, but Twig, the little girl at the heart of the story, is clearly poor. She lives on the “fourth floor of a high sort of house in the city,” has safety pins for buttons, and wears a piece of grocery string around one of her shoes to keep it from falling apart. She doesn’t appear to have any siblings, nor any fellow children as neighbors. She also doesn’t appear to have a single toy.

What she does have is a backyard, which she shares with two sparrows, a cat, an ice-wagon horse, a leaky drainpipe, and a single dandelion. It is out of these things—as well as discarded household objects—that Twig constructs and stars in the most fanciful and amusing of adventures.

The story begins with a fairy house. Not the fairy house of our children’s imaginations, with mossy rocks and grassy beds and twigs tied with twine. This is a strictly urban fairy house, made from an empty, overturned can of tomatoes with a slit down the front (“where somebody’s can opener had made a mistake”). Twig furnishes the house with a thimble (cooking pot), a bottletop (which makes a table when balanced on the thimble), a piece of shiny paper (mirror), and an old feather (a broom to sweep the floors). And then she waits for a fairy to move in.

A fairy does move in, although not the “pretty little fairy” Twig was expecting. Elf is an eager, mischievous, cap-sporting boy fairy with a potato skin for clothing and a high-pitched voice (“like the tiny little squeak which was in Twig’s Papa’s Sunday shoes”). We later learn that he has escaped from the Grimms’ tale, “The Elves and the Shoemaker,” and is eager to try his hand at magic in “real life.” As far as Twig is concerned, Elf exceeds expectations the moment he tries out a magic spell from his trusty red book and ends up miniaturizing her. Suddenly, the two are keeping house together inside the tomato can, and it isn’t long before they are bantering like an old married couple. 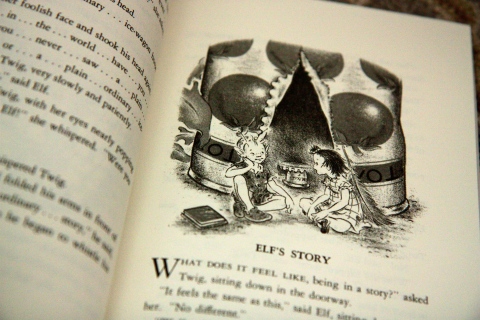 Seen through the eyes of Twig’s new miniaturized self, the backyard becomes a place of wonder and excitement. She swings from the leaves of the lone dandelion. She drinks tea out of old toothpaste tops. Along with Elf, she climbs up the ice-wagon horse’s tail and takes a siesta nestled inside the horse’s ears. (Of course, transforming the mundane into the extraordinary is not without its limits: Twig has to draw the line when Elf brings a cockroach into the tomato can and attempts to endear him to Twig as a pet named Chummie.) 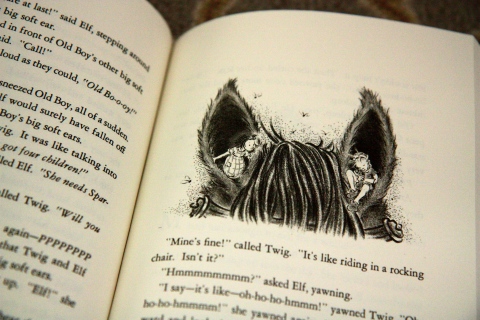 But my daughter’s favorite adventures come when, perched on the back of Mrs. Sparrow, Twig and Elf take trips up to the nest to help the mother-to-be sit on her eggs. For one, the four eggs end up hatching on their watch, and Twig and Elf are beside themselves trying to figure out how to hush the endless “squa-a-a-a-w-w-w-w-k” of the ravenous babies (many giggles here). Secondly, the page-long description of the nest is itself fascinating—a regular archaeology site of discarded treasures. In addition to straw and horse hair and old feathers, there is “a piece of silver tinsel from last year’s Christmas tree,” a burnt match, the first six inches of a tape measure, and “a little limp piece of rubber from an old balloon” (“Oh! Twig had never seen such a mess!”)

Anyone hoping for some conventional fairy lore will not be disappointed, as the last third of the story brings the arrival of the Fairy Queen, who descends from Fairyland “with a long pink dress on, and hair that was as yellow as Twig’s Papa’s taxi, and wings you could see right through—like cellophane.” She is followed shortly by the quirkiest character in the book: a white-haired, wizened fairy named Lord Buzzle Cobb-Webb, who arrives on the Royal Magical Cobb-Webb Kerchief, addresses Twig as “young whipper-snapper,” and prepares to escort the Fairy Queen, Elf, and Twig if she so desires back to Fairyland.

So commences my favorite scene, as Twig wrestles with her understanding of what is real, what is pretend, and who is the true mastermind behind these events. Of course, the savvy reader has suspected the answer all along: the book’s story is Twig’s creation—and, as such, Twig has the power to tell it again, tell it differently, or tell a new one altogether.

It’s the Fairy Queen who reveals Twig’s power to her. When Twig complains that she can’t make the trip to Fairyland on account of her “ordinary old dress,” the Queen assures her that it’s not what lies on the outside that matters, but what lies within.

My children have built their fair share of fairy houses in our backyard over the years. Here’s hoping that this summer, they will go one step further and allow their imaginations to take up residence front and center, to see their surroundings with fresh eyes, and to create new stories that will be no one’s but their own. The next time my kids tell me what to buy this summer, I’m going to tell them to take out the recycling. That should be everything they need to get busy.

You are currently reading Backyard Summers (Fairy Houses Optional) at What to Read to Your Kids.