If you’ve been following my blog for awhile now (thank you!), it’s no secret that I like non-traditional recommendations for Valentine’s Day. In past years, I’ve typically favored off-beat stories about friendship bonds, as opposed to the saccharine hearts and hugs that publishers seem to push this time of year. I’m referring to gems such as this and these and this; and if I was going to continue my friendship trend this year, I would be singing the praises of Salina Yoon’s new lovely and understated Be a Friend.

Instead, I’ve decided that this February calls for a bit of high romance, inspired by a fairy tale that has been exquisitely re-imagined by Angela Barrett and Vivian French. I had initially intended to feature The Most Wonderful Thing in the World (Ages 5-10) in my December holiday gift guide, but I never found the right spot for it. Now, it occurs to me that I was subconsciously waiting until the Holiday of Love to tell you about a story that sings of universal love at its most transcendent.

The Most Wonderful Thing in the World belongs to a class of picture books that I think of as more appropriately suited for the elementary child, as opposed to the preschool ages typically associated with picture books. I’m always saddened when parents tell me that their household has “moved beyond” picture books. As if mellifluous language and spellbinding art were something one would ever hope to graduate from (not to mention the ornate vocabulary and abstract ideas in many of these mature picture books)! Please, I beg of you, no matter how much your children begin to sink their teeth into the expansive world of chapter books, don’t leave behind picture books entirely. The best teachers know their importance and use them in elementary, middle, and—in an increasing trend—even high schools. Their spines may be thin, but they are worth their weight in gold.

British illustrator Angela Barrett originally approached Scottish author Vivian French about collaborating on a contemporary retelling of one of Barrett’s favorite tales as a child. The premise of The Most Wonderful Thing in the World is as old as the hills (one could call it a more refined riff on Jolly Roger Bradfield’s outlandishly entertaining Pickle-Chiffon Pie, which has always been something of an obsession in our house). A king and queen stage a contest to find their daughter a husband. Advised by “wise Old Angelo,” the royal parents decree that they will marry the princess to the suitor who shows them “the most wonderful thing in the world.” The expectation being that only the richest, most powerful suitor will triumph.

Before you get all “please tell me we aren’t still writing about girls as pawns in the hands of oppressive traditions,” let me tell you about Princess Lucia. The curious and clever princess, whom her genuinely loving but prohibitively overprotective parents have never escorted outside the walls of the palace, takes advantage of her parents’ preoccupation with the contest to gain permission to explore the kingdom that she will someday rule. She beseeches the help of a common man, whom she encounters playing with a tabby cat beside the canal. “I am Salvatore, pretty lady, and I am entirely at your service. Today, tomorrow, and the next day, until you have seen all that you want.” He may not be a prince or a duke or an earl, but he knows every inch of the sidewalks and canals of the city, including the ”hidden heart,” where “the grand never thought to go.” Lucia, we quickly understand, intends to be a Queen of the People. 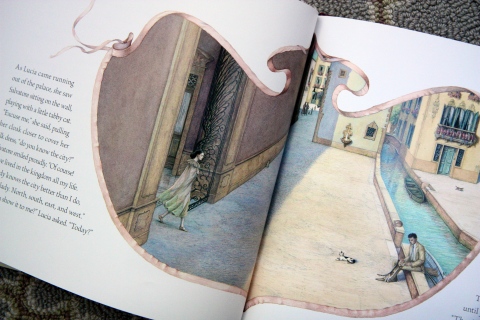 Angela Barrett—the same artist who did the enchanting watercolors for The Night Fairy (I mean, I thought I was obsessed then…)—has set this fairy tale in a magnificently adorned Edwardian Venice, with winding canals and gilded architecture at every turn.

Barrett’s intricate art is mesmerizing in its own right, but it’s when we combine it with the lyrical prose of Vivian French—the same author who wrote, among others, this clever book—that the real magic happens. How we envy Lucia the chance to explore every nook and cranny, every light and shadow, of this island!

They walked through bustling markets where
golden oranges were heaped in piles, and under grand
marble arches; they gazed at velvet-curtained mansions
and balconies festooned with flowers; and they counted
the tall towers of the city cathedral.

Of equal interest—or perhaps more, if my children’s reactions are any indication—is what is happening back at the royal palace, while Lucia is off exploring the city. Potential suitors are carting through the doors one splendor after another, hoping to pass off one as “the most wonderful thing in the world.” The parade begins with “a hundred roses” and “a snow-white horse” and becomes progressively more obscure, with “acrobats and airships, pyramids and performing dogs, mysterious magical beasts, and a piece of frozen sky.” Pouring over these double-page spreads, we discover countless additional treasures not even named (my kids were especially taken by the Tin Mn, having just finished The Wonderful Wizard of Oz).

What constitutes beauty and wonder? How do we compare one splendor to another? These are deliciously enticing questions for our children to ponder. (By the way, French’s wry humor comes through more than once and lends a touch of modern sensibility to the tale. When the last suitor departs with his “weapons of mass destruction,” the queen asks, “How can anyone believe weapons are the most wonderful thing in the world?”) 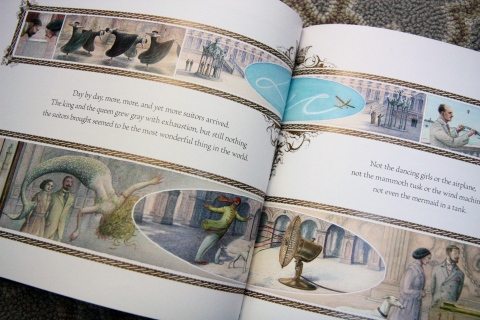 Our two story lines ultimately intersect along “heavy hearts.” The stumped king and queen are reluctant to deem anything they’ve seen “the most wonderful thing in the world,” and so they are without a worthy suitor for their cherished daughter. Salvatore and Lucia are equally distraught, having no more excuses to spend time together now that they have finished exploring the city. Salvatore rows home to his own tiny island and laments to his grandfather, who happens to be Old Angelo, that he loves a girl he can never marry.

Old Angelo took off his spectacles, rubbed them clean and
put them on again. “It seems to me that the answer is easy.
You must show the king and queen the most wonderful thing
in the world, and then Princess Lucia will be yours.”

The next day, when Salvatore witnesses the warm embrace with which her parents greet Lucia, it hits him. Lucia is the most wonderful thing in the world. Or, more precisely, the love that her parents (and now Salvatore) feels for her.  Taking his love by the hand, Salvatore—who “doesn’t look anything like the others,” the queen notices—professes to the royal family, “Here is the most wonderful thing in the world.” The queen’s tickled response couldn’t be more genuine: “Oh!Oh! Oh, of course she is!”

Lucia took Salvatore’s other hand.
“Thank you,” she said, and she kissed him. 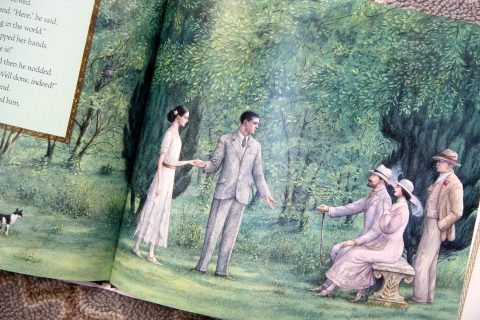 Sound the wedding bells! Get out the tissues! Let’s all go straight to Italy! Yes, love can sometimes blind us (the king and queen initially failed to see that their daughter would make her own best choice), but it is also the Great Equalizer. It can transcend differences and deliver us into joy and peace and understanding beyond our wildest dreams. Love—between a parent and a child, between two lovers, between a ruler and her people, or in any of its other numerous forms—is the most wonderful thing in the world.

Now that’s the kind of Valentine’s Day I’d like my kids to celebrate.

Review copy provided by Candlewick. Amazon.com affiliate links are provided mainly for ease and reference–although I prefer that we all shop local when we can!

You are currently reading For the Romantic (A Valentine’s Post) at What to Read to Your Kids.