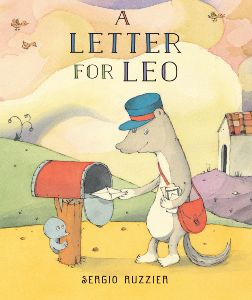 Our weekend was a flurry of Valentine-making, as my children colored, traced, and cut out hearts for the kids in their classes. While my four year old has to make 20 Valentines, one for each person in her class, my seven year old’s class is doing “Secret Valentine,” where each child draws a name at random and then makes and does things for that person over the course of two weeks. Both kids are giddy with pride in their work and excitement over the upcoming celebrations. (It turns out that my daughter cuts at the speed at which she chews, which is to say that next year we need to start this project three months earlier.)

For the past two years, in honor of V-Day, I’ve given you gift suggestions of friendship books: sweet, beautifully illustrated stories, like Lovabye Dragon, Paul Meets Bernadette, and Brimsby’s Hats, where loneliness dissolves in unexpected arrivals and generous acts. This year, I was going to break with this tradition. I was going to suggest a book that’s literally bursting with hearts: red and pink and lots and lots of them. I was going to tell you to wrap up Jo Witek’s In My Heart: A Book of Feelings, not only because delightful rainbow-scribbled hearts explode off every page, but also because it’s the most effective presentation of feelings for children that I’ve EVER read. Alas, this new book has been so popular that the publisher has had to re-print it—and it won’t be available again until after Valentine’s Day (although you should still get it).

So then I thought I’d tell you about A Crankenstein Valentine, which is Samantha Berger and newly-crowned Caldecott winner Dan Santat’s clever and grouchy twist on Valentine’s Day (I’m sure you don’t know anyone who can relate). And which, if you’re intent on a book specific to Valentine’s Day, you should definitely get.

In the end, though, as I watched my children work for hours on their Valentines, my son scheming about how he was going to sneak his notes into the backpack of his Secret Valentine without being noticed, I came back to the realization that, for children, Valentine’s Day IS about friendship. It’s about celebrating their friends, about making the people around them feel a little more special than usual. It’s about putting in that extra bit of effort. And reaping boundless rewards in return.

So, I’m sorry to say that you’re not getting a break from my tradition of recommending timeless friendship stories this Valentine’s Day. I’m going to suggest a book that came out last fall: a friendship story about a weasel and a bird. A story that makes my heart swell so big when I’m reading it to my kids, that I cannot help but clutch it to my chest when I’m finished. A story that reminds me how the simplest acts of caring can sometimes be the most powerful.

A Letter for Leo (Ages 2-7) is written and illustrated by the Italian-born artist Sergio Ruzzier. Ruzzier has long been one of my favorites, with his endearing knack of blending a kind of quaint old-fashionedness, with contemporary color schemes and unexpected quirkiness. Leo the weasel (or ferret?) is a mailman “of a little old town,” who takes pride in delivering letters and packages to his fellow animals.

Cheerful, good-natured Leo reminds me of my grandfather who, once retired, used to drive around on Sunday mornings delivering The New York Times to the other American families who neighbored his summer cottage in rural Ontario. My family used to joke that, like Leo, who is invited to take frequent breaks from his route to “play a game of bocce with his friends” or “sit down for a moment to rest and chat,” my grandfather was treated to six different breakfasts over the course of a single morning.

But there’s a quiet sadness at the heart of this book, as much for what is spoken as what is not. Despite his casual acquaintances, Leo is lonely. All the years that Leo has been delivering mail, he himself has never received a letter.

Leo is not a stickler for conversation, so he and the bird settle into a harmonious, if rather silent, coexistence. I too find that there are few words to describe the delight my daughter feels, as she points out the little bed that Leo crafts for the bird, or the difference in size of the bowls and forks with which the two of them eat. “Leo and Cheep are now a little family,” and we all know how good that feels.

We as readers know where this is going, as the seasons pass and spring brings flocks of birds flying overhead. Leo knows Cheep is strong enough to rejoin his family on their return north, although our heart aches alongside him as he lets his friend go. The fact that we feel so much in such a short, sparsely-worded book is a profound testament to Ruzzier’s immense talent. 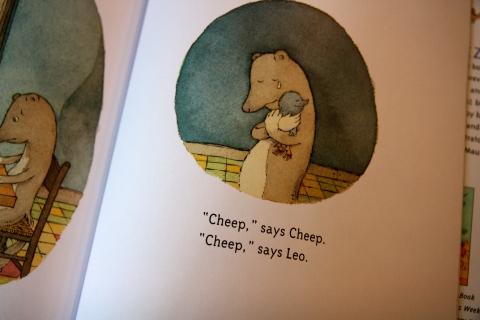 Leo falls back into the routines of his mail route, but there’s no question that his life has been changed for the better. Sure enough, a few days later, who receives his very first letter, addressed to him and bearing the word “cheep” nine times over?

The hearts that my children are cutting up and writing their name across—they aren’t just scraps of paper. They’re tangible proof of friendship and sometimes also of love. They say: you aren’t alone. I care. I remembered. I did this for you.

May your Valentine’s celebrations be full of buoyant scribbles, jagged corners, and crackly paste.

Review copy courtesy of Houghton Mifflin Harcourt. All opinions are my own. Amazon.com affiliate links support my book-buying habit and contribute to my being able to share more great books with you–although I prefer that we all shop local when we can!

You are currently reading Full Mailbox, Full Heart: A Valentine’s Day Post at What to Read to Your Kids.